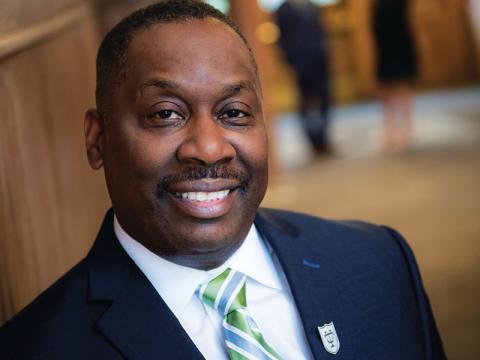 Dr. Thomas LaVeist is a lead researcher in studies about the racial disparities that influence or impact an individual’s health outcome at the Tulane School of Public Health and Tropical Medicine where he is also its first African American dean. Dr. LaVeist has contributed more than 150 articles on this academic topic and has given lectures and written books on “minority health issues and cultural competency in healthcare.” Before arriving at Tulane in 2018, Dr. LaVeist was a professor at Johns Hopkins University and director of its Center for Health Disparities Solutions from 1990 to 2016. He then spent two years as a professor and chair of the Health Policy Management at George Washington University from 2016 until he came to Tulane in 2018.

Thomas LaVeist was born in Brooklyn, New York on February 3, 1961. His parents were William Thomas LaVeist, from the Dutch-French Speaking island of St. Martin in the Caribbean, and Eudora E. LaVeist, originally from the Dominican Republic. LaVeist grew up in a housing project located in the Brownsville section of New York, with his parents and siblings. He attended the University of Maryland Eastern Shore (UMES) obtaining his Bachelor of Arts in 1984 and later the University of Michigan, where he helped found the National Black Graduate Students Association (NBGSA) and obtained his Ph.D. in medical sociology in 1988. In 1990 Dr. LaVeist completed a postdoctoral fellowship in public health at the University of Michigan School of Public Health.

Dr. LaVeist’s research on race disparities which began with his dissertation, he describes how he was in part inspired by his reading an account on the sinking of the ocean liner Titanic in 1912 that he found in a secondhand bookstore in Ann Arbor. He noted that one’s social class could actually be predictive of death. Those who survived the Titanic sinking were most likely to have first-class tickets. Those with second class tickets had larger numbers of deaths but those who held third class tickets were the most likely to perish in this major maritime catastrophe. He surmised that the ticketholders social status impacted the help they received during the vessel’s sinking. He concluded that an individual’s income and socioeconomic status impacts the type of assistance one received not only in disasters but also in regard to regular health care. As he noted, race in the United States is particularly tied to income and socioeconomic status and that people in this category often had health disparities because of barriers to health care, both medical and more generally societal, due to their race.

Dr. Thomas LaVeist resides in New Orleans with his spouse, Bridgette Thomas LaVeist, and the couple’s children. He continues his pioneering research into the socioeconomic (and racial) causes of health disparities in low-income communities across the United States.