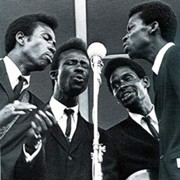 The Chambers Brothers, comprising four brothers, were reared in rural Lee County, Mississippi. Their parents were George Chambers Sr., a farmer, and Victoria Chambers, a seamstress, although both were sharecroppers. There were 13 children. The ensemble members were brothers George Jr., who played the washtub bass and Danelectro bass guitar, born on September 26, 1931; Lester, the harmonica player, born on April 13, 1940; guitarist Willie, born on March 3, 1938; and on August 22, 1942, Joe, the youngest, a guitarist, was born. Brian Keenan, the percussionist, and only nonbiological member, was born in New York on January 28, 1943. The group was formed in 1954 in Los Angeles, California, and became one of the first interracial bands.

The Chambers Brothers rose to national prominence in 1965. They then signed with Columbia Records the following year. They performed at the Newport Folk Festival, the annual folk-oriented music festival in Newport, Rhode Island. In 1968 they recorded their first album, Time Has Come Today which included a single of the same name. “Time Has Come Today” was eleven minutes of semi-psychedelic music rhythmically balanced by a cowbell. It peaked at #11 on the Billboard Hot 100 and sat for five weeks on the chart, giving the Chambers Brothers the biggest hit of their career. A second single later in 1968, “A New Time-A New Day,” peaked at #16, and their third hit, “Love, Peace and Happiness,” peaked at #58 in 1969.

The Chamber Brothers disbanded in 1971. However, the group reformed in 1974 without Brian Keenan. This lasted only one year as the Chambers Brothers stopped recording in 1975. Each member, however, continued to play music. George, for example, returned to gospel music and later became deacon of his church.

In 2002 in a California Senate hearing on Record Label Accounting Practices, it was revealed that “Time Has Come Today” earned the Chamber Brothers less than $250 in royalties for the European market over 16 years. It was also discovered that copies of their records on Columbia’s foreign affiliate labels were being sold and the ensemble had not received any royalties from those sales. Also, in 2011, “Time Has Come Today” was used in the videogame Homefront, which sold over three million copies globally but Chamber Brothers received only $4,000 divided evenly among them.