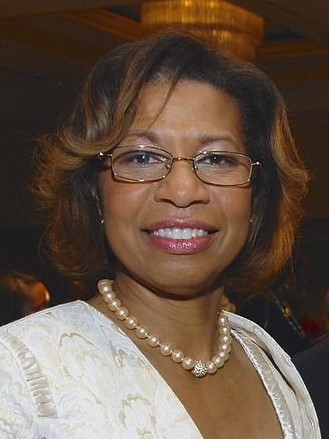 Sylvia Yvonne Cyrus, Executive Director of The Association for the Study of African American Life and History (ASALH), was born ‪on December 16, 1955, in Plainfield, New Jersey, to John Marvin Cyrus, Sr. from Marion, Virginia, an orphan who achieved an eighth-grade education in Cranford, New Jersey, and Ruby Johnson Cyrus, from Amburg (now Deltaville, Virginia), a public-school teacher and graduate of Virginia Union University in Richmond. Sylvia was among the first to integrate McManus Jr. High School in Linden, New Jersey, in 1968. She faced the challenges, especially coming from a separate but far from the equal societal system but rose to the challenges encountered in her new environment with a determination to excel not only for herself but also for family and community, thus having an accurate understanding of the ills of oppression.

After graduating from Linden High School, in Linden Union County, in 1973, Cyrus enrolled in Hampton University in Hampton, Virginia. She graduated with higher honors and received a Bachelor of Science degree in Human Ecology, Retail Marketing in 1977.

From 1977 to 1988, Cyrus was a corporate office Assistant Buyer at JC Penney in New York City and General Manager for Comprehensive Building Supplies, a family-owned business from 1989 to 2000.

In 2002, Cyrus, now a life member of Alpha Kappa Alpha Sorority, Inc., served as president of Beta Alpha Omega Chapter in Newark, New Jersey, and served on national and regional committees of the sorority. She oversaw programs for youth and raised scholarship funds for high school students and a variety of other programs to provide service to all humanity.

In 2003 Cyrus became the 12th Executive Director of the Association for the Study of African American Life & History and has served in that capacity longer than any other executive director except Association founder Carter G. Woodson. As Executive Director, her mission is to promote research, preserve, interpret and disseminate information regarding black life, history and culture. She has expanded ASALH’s community partnerships with established and emerging organizations and leading national corporations. These strategic partnerships, including the National Park Service, have heightened the awareness and role of preserving black history.

In 2015, the Washington Informer Charities, Inc. named Cyrus one of Washington’s 50 Influencers. With Cyrus at the helm of the organization, the ASALH in 2018 received the Congressional Black Caucus Foundation’s Distinguished Organization Avoice Heritage Award and the Historic Achievement Award from The Historical Society of Washington, D.C.

Currently, Cyrus serves on the Advisory Board for the Smithsonian National Postal Museum and is a member of the NAACP. She is a Charter Member of the National Museum of African American History and Culture in Washington, D.C., and a life member of the Association of Black Women Historians. In addition, Sylvia Yvonne Cyrus serves as the historian for the Robinson/ Powell/ Johnson Family, whose roots are tied to Middlesex County, Virginia dating back to the mid-1800s.