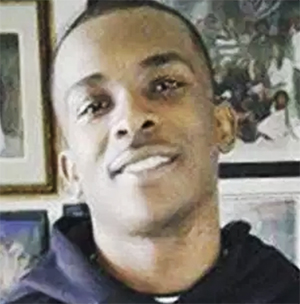 In 2018 Stephon Clark, a 22-year old man from Sacramento, California, was shot multiple times in his grandmother’s backyard by two police officers responding to a 911 call about a suspicious person. Clark was unarmed and holding only a cell phone in his hand at the time he was murdered. The incident resulted in widespread protests in Sacramento, as well as changes in police procedures in Sacramento regarding the use of body cameras and the pursuit of suspects on foot.

Clark was born on August 10, 1995. He played football at Sacramento Charter High School and graduated from there in 2013. On the night of March 18, 2018, officers Terrence Mercadal and Jared Robinet responded to a report of an individual breaking into vehicles in the Meadowview neighborhood of Sacramento. A police helicopter spotted an individual later identified as Clark and directed the officers to his location. After a foot pursuit lasting only a few seconds, Clark entered his grandmother’s backyard. The officers observed an object in Clark’s hand that they believed was a gun but was actually a cell phone. They fired twenty shots, striking Clark eight times, six of which were in his side and back.

An investigation revealed the officers did not identify themselves as police or issue verbal warnings prior to the use of deadly force. After the shooting, both officers muted the audio feeds on their body cameras. The shooting precipitated widespread protests from Black Lives Matter activists, the National Association for the Advancement of Colored People, and other local groups. Hundreds of protesters gathered at a city council meeting days after the shooting, occupying the chambers and bringing the meeting to a halt. Other protesters blocked entrances to professional sporting events to call attention to Clark’s death. Sequette Clark, Stephon’s mother, criticized authorities for releasing details about Clark’s criminal record and a recent domestic violence report, stating such information had no bearing on the events that led to his death.In the months after the shooting, the City of Sacramento implemented a foot-pursuit policy that instructed officers to consider whether the risk to the public, the suspect, and the officers themselves justified the continued pursuit. The city also revised its policies regarding when officers are authorized to turn off their body cameras.

In 2019, after a year-long investigation, the Sacramento County District Attorney Anne Marie Schubert determined Mercadal and Robinet had probable cause to pursue Clark and whose use of force was justified under the circumstances. He brought no charges against the officers. Clark’s family, in response, filed a wrongful-death lawsuit against the two officers and the City of Sacramento for racial profiling and using excessive force. In September, the city settled the lawsuit for $2.4 million, which will be held in a trust for Clark’s two young sons.