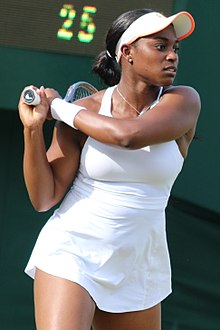 Sloane Stephens is an American tennis player, born in Plantation, Florida on March 20, 1993. Her father John played for the New England Patriots, and her mother Sybil (Smith) was the first woman to be named a first team All-American swimmer in Division one history. Her mother left her father when Stephens was a baby, and she was raised by stepfather Sheldon Farrell. The family moved to Fresno, California when Stephens was two years old, and she began playing tennis at age nine. By eleven, Stephens and her family relocated to Boca Raton, Florida for more formal training at the Chris Evert Tennis Academy.

Stephens began her junior career in 2006 on the ITF (International Tennis Federation) Junior Circuit, and her professional career in 2007 on the ITF Women’s Circuit. Her performance in the junior circuit over four years brought Stephens to a junior ranking of No. 5 in the world. In 2008, she won her first title in a doubles match with Christina McHale in Wichita, Kansas, earning $10,000. After playing with the New York Buzz in 2009 in World Team Tennis, Stephens turned full pro at the age of sixteen. By 2010, she finished the season ranked at No. 198 in the top WTA 200. Stephens was ranked at No. 128 in 2011, and in August, Stephens won her first Grand Slam match against Reka Luca Jan and was ranked as the youngest player in the top 100.

In 2012, Stephens played in the Australia Open, Miami Open, Fed Cup, Italian Open, Internationaux de Strasbourg, French Open, Wimbledon, Citi Open and Cincinnati open. Ranked at 38, she was the youngest player in the WTA top 50 after these matches. She finished the year as the second highest ranked American at No. 11. A wrist injury in 2014 forced Stephens to end her season early and she fell to No. 37 in the WTA ranking. After her return in 2015, she finished the season at No. 30.

Stephens played her 2016 with a foot injury, and after being diagnosed with a stress fracture, was forced to have surgery in January 2017. Stephens returned to the court in April, and her season was marred with losses. By August, however, she defeated Madison Keys to win her first Grand Slam tournament title. She began the season ranked at No. 13, and by the end of the season, she was ranked at No. 6. After her performance in Wimbledon in 2018, she was ranked at a career high of No. 3. Throughout the 2019 and 2020 seasons, Stephens struggled, and her ranking dropped dramatically, but she continues to train and compete.

Stephens created the Sloane Stephens Foundation in 2013, which offers training, builds tennis courts in impoverished neighborhoods, and holds after-school tennis programs. She has been sponsored by clothing retailers Nike and Under Armour, auto manufacturer Mercedes Benz, and has been a part of the Colgate Bright Smiles campaign. Additionally, she has worked with Soles4Souls, a charity that collects new and used athletic shoes for children in poverty. In 2017 Stephens earned her bachelor’s degree in communication studies from Indiana University. In 2019, she announced her engagement to U.S. Soccer player Jozy Altidore, and in 2021, she launched a swimsuit collection in collaboration with the company Solid & Striped.