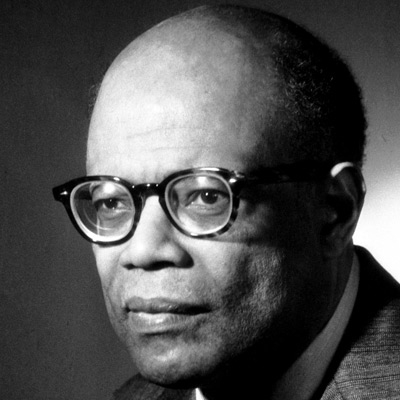 William Arthur Lewis was a public intellectual in the field of development economics, who in 1971 became the first African American to receive a Nobel Prize in category other than peace.  Lewis was honored for his work in economics.  Lewis was the author of 12 books and more than 80 technical works in developmental economics

William Arthur Lewis was born in St. Lucia in the British West Indies in 1915, the fourth of five children, to schoolteacher parents George and Ida Lewis. He finished high school at the age of fourteen, enabling him to win a government scholarship to study in Great Britain.  At 18 he entered the London School of Economics to work for a degree in commerce.

Lewis received first class honours in his degree in 1938, completing his Ph.D. thesis at the same school in 1940. In 1938, he became the London School’s first black faculty member, lecturing and teaching there until 1948. Between 1948 and 1957, Lewis was the Professor of Politics at the University of Manchester where he became the first black person to hold a chair in a British university. Lewis made his most important scholarly contributions to the field of development economics at the University of Manchester.  Many of his peers and colleagues described him as the founding figure of the field and crediting his publications with providing new perspectives on examining the economies of the less developed parts of the world.

At Manchester University in 1954 Lewis wrote the work, entitled “Economic Development with Unlimited Supplies of Labour” for which he received the Nobel Prize for Economics in 1979 alongside Chicago, Illinois economics professor Theodore Schultz. He followed the article with a well-received overview of development economics called “The Theory of Economic Growth.”  In both articles, Lewis attached enormous importance to education and social development as agents of change.  He argued they provided guidelines used all over the world by a variety of institutions and governments for promoting economic growth.

In addition to his many academic achievements, Lewis made a mark in public affairs, during and after World War II advising the British Colonial Office about the ways Britain could alter its economic relations with colonial territories in preparation for their independence. He also advised governments moving towards independence.  In 1957, for example, when Ghana gained its independence, Lewis became the country’s chief economic adviser, helping to shape its first Five Year Development Plan (1959-1963).

After leaving Ghana in 1959, Lewis became principal and then the first vice chancellor of the University of the West Indies.  He was knighted by Queen Elizabeth in recognition of his service to the Commonwealth in 1963. In the same year (1963) he became a professorship of political economy at Princeton University where he remained until he retired in 1983. Lewis remained an active scholar until his death on June 15th, 1991 at the age of seventy six.