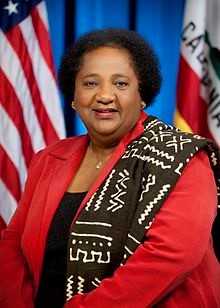 Currently California Secretary of State, Shirley Nash Weber was born September 20, 1948, in Hope, Arkansas, one of the eight children of David Nash, a semi-literate sharecropper and later steel mill worker, and Mildred Nash, a homemaker. When her father disagreed with a white farmer and was threatened by a white lynch mob, her family fled to California. Weber grew up in South Los Angeles. She graduated at the top of her high school class and attended the University of California at Los Angeles, earning bachelor’s and master’s degrees and, at age 26, a Ph.D. in communications with a dissertation on Marcus Garvey.

Having previously taught classes at Los Angeles City College and California State University at Los Angeles, Weber was hired to teach at San Diego State University in 1972. An award-winning teacher, advisor to black faculty and staff, and for most of its existence, chairperson of the Department Africana Studies, she became President of the National Council for Black Studies, the foremost organization promoting Black Studies in higher education, and Executive Director of San Diego’s Association of African American Educators. A captivating and forceful public speaker, she was often called upon to deliver keynote addresses at gatherings across the nation.

Weber’s high profile at the university and in the city facilitated her rise in politics. She was twice elected to terms on the San Diego School Board and served as its president. She also chaired the San Diego Citizens’ Equal Opportunity Commission and campaigned unsuccessfully for seats on the City Council and the County Board of Supervisors. After retiring from San Diego State University in 2010, Weber ran as a Democrat in the 79th District and was elected to the California State Assembly in 2012, thus becoming the first African American sent to represent a district in San Diego County in the state legislature.

Reelected to the California State Assembly in 2014, 2016, and 2020, Weber chaired the Assembly Budget Committee and was a member of the California Assembly’s Committee on Higher Education. She pushed for police reform, a measure combating hate crimes, challenged teacher tenure and evaluation criteria, proposed establishment of a California State University campus in the city of Chula Vista, explored reparations for slavery, tried to reinstate affirmative action in the public sector, was a delegate at the 2016 Democratic National Convention, and was one of California’s Presidential Electors in 2016 and 2020.

With the elevation of Alex Padilla to the United States Senate, California’s Gov. Gavin Newsom picked Weber, who at the time chaired the California Legislative Black Caucus (CLCB), to fill the vacant office of California Secretary of State. The announcement was made December 22, 2020. Her appointment was confirmed by the California State Senate on January 29, 2021.

Weber was married to Daniel Weber, an attorney and administrative judge she met at UCLA, who died in 2002. Their marriage produced two children: a son, Akil Khalfani Weber, and a daughter, Akilah Faizah Weber, a medical doctor who in April 2021 replaced her mother as 79th District representative in the California State Assembly.