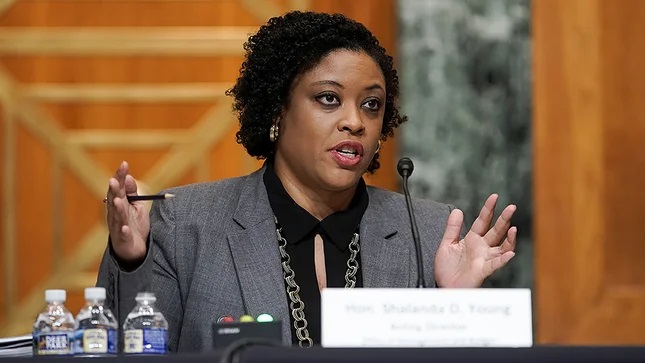 Shalanda Delores Young is a U.S. policy advisor who is the first Black woman to serve as Director of the United States Office of Management and Budget (OMB). She previously served as Deputy Director from March 24, 2021, to March 17, 2022 and before that as chief of staff of the U.S. House of Representatives Appropriations Committee. The U.S. Senate confirmed her to this Cabinet position with bipartisan support in March 2022.

Young, a native of Baton Rouge, Louisiana, grew up in Clinton, Louisiana. She earned a Bachelor of Arts degree from Loyola University New Orleans and a Master of Health Administration degree from Tulane University. Around 2001, she moved to Washington, D.C., where she worked as a Presidential Management Fellow at the National Institutes of Health (NIH). Young was the first black woman to serve as chief of staff on the House Appropriations Committee and received bipartisan praise for her work in that role. She served on the committee for more than 14 years and took over as chief of staff in 2017.

As the committee’s chief of staff, Young was involved in drafting proposals related to the 2018-2019 U.S. federal government shutdown and the federal government’s response to the COVID-19 pandemic. During her time, Young was responsible for $1.3 trillion in annual appropriations legislation, disaster relief and “important aspects of COVID-19 spending,” according to the White House.

Young promotes two principles that guide the way OMB and the Biden Administration approach Federal spending. The first is to ensure that the federal government is making the right investments. As a new mother, who gave birth to her daughter in October 2021, she is extremely interested in child care and supporting families. The second issue, she said, is fiscal responsibility. Young pointed out that the Biden administration has proposed ways to fund its new spending proposals and said this is the “right fiscal and economic” approach.