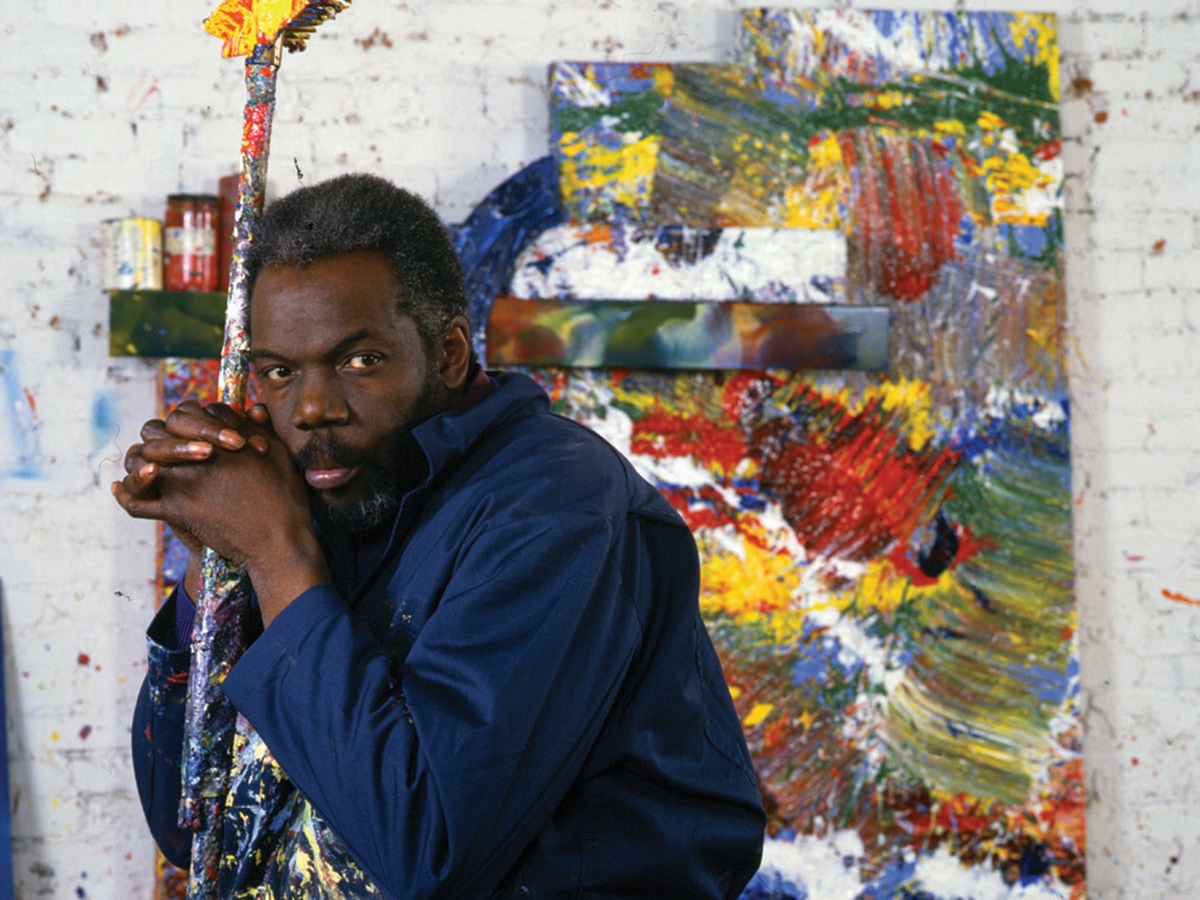 World-renowned artist Sam Gilliam was born in Tupelo, Mississippi on November 30, 1933, to Sam Gilliam, Sr., a railroad worker, and Estery Gilliam, a homemaker. They had eight children, and Sam, Jr was the seventh. When the parents moved to Louisville, Kentucky, all of the Gilliam children subsequently reared there.

As a child, Sam demonstrated an interest in cartoon drawing. This talent was evident at Madison Junior High School and Central High School in Louisville. He graduated in 1951. Upon leaving high school, Sam enrolled at the University of Louisville (UL) and received a Bachelor of Arts degree in Fine Arts in 1955. He presented an entire solo exhibition at the university as part of his qualification for graduation.

Gilliam was drafted into the United States Army in 1956. Upon receiving an honorable discharge in 1958, he resumed art studies, earning a Master of Arts degree in painting at the University of Louisville in 1961.

In 1962, Gilliam married Dorothy Butler, who would later become the first black female reporter with the Washington Post, and they relocated to the District of Columbia. They eventually had three daughters, Stephanie, Melissa, Leah. In 1965, while an instructor of painting at the Corcoran School of Art in the District of Columbia, Gilliam became the first artist to introduce the idea of a draped, painted canvas hanging without support. In 1984, he became a professor of painting at Carnegie Mellon University in Pennsylvania.

While Gilliam was developing his reputation as an artist, he challenged what he perceived as unfairness in the art establishment. In 1971 Gilliam boycotted a Whitney Museum art exhibition in solidarity with the Black Emergency Cultural Coalition of New York as a protest against the museum for its refusal to consult with black art experts in selecting art for the show. Also, that year, Gilliam received the prestigious Guggenheim Memorial Foundation Fellowship. A year later, in 1972, he became the first African American artist to represent the United States at the Italian Società di Cultura la Biennale di Venezia, an international art exhibition in Venice, Italy.

A recipient of eight honorary doctorates, Gilliam received one in 1980 from the University of Louisville, his alma mater and a decade later, in 1990, one from Northwestern University in Evanston, Illinois. In 2011, Gilliam’s painting “Forth” sold for $1.16 million at Sotheby’s London, United Kingdom last year. The medium of this work comprised diluted acrylic to raw canvas; folded, creased, and soaked material that allowed pigments to infuse into unforeseen chromatic compositions.

Gilliam was commissioned in 2016 to produce a work as part of the grand opening of the Smithsonian National Museum of African American History and Culture in the District of Columbia. The following year, 2017, he exhibited at Italian Società di Cultura la Biennale di Venezia for the second time in the Central Pavilion (Giardini) and the Arsenale in 2017.

Fifty-six museums throughout the United States and France house Sam Gilliam’s work as part of their permanent collections. This includes the National Gallery of Art in Washington, D.C., the Metropolitan Museum of Art in New York City, the Smithsonian National Museum of American Art , the Art Institute of Chicago, the Hirshhorn Museum & Sculpture Garden in Washington, D.C and the Galerie Darthea Speyer in Paris, France.