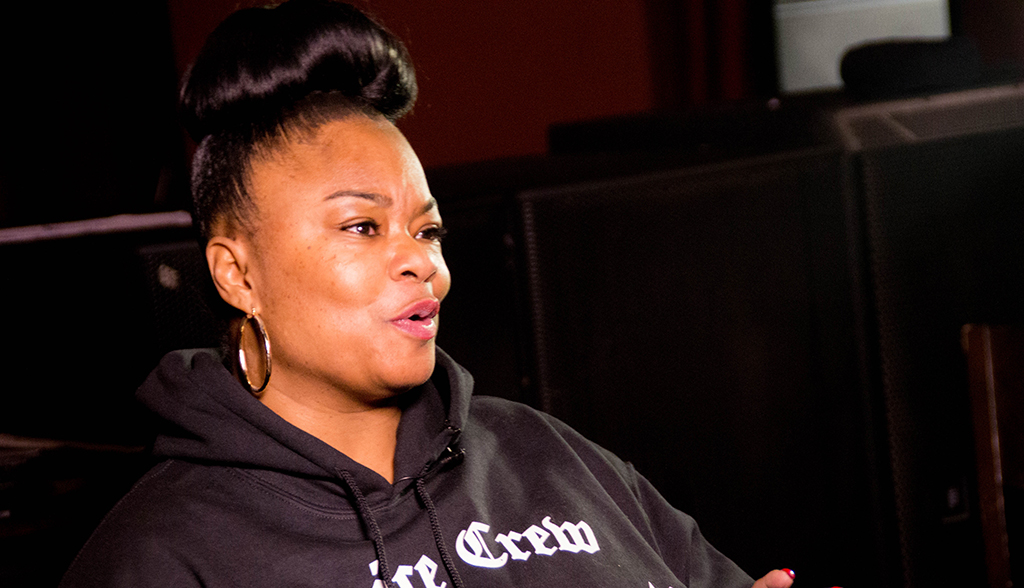 Lolita Shanté Gooden is an American rapper best known under the stage name Roxanne Shanté. Gooden was born on November 5, 1969 in Queens, New York. She grew up in the Queensbridge Projects, the largest public housing complex in North America. Gooden started rapping at the age of nine and won a local rap battle contest at the age of ten, earning fifty dollars. Gooden began honing her skills on the street corners, taking on much older male components, and wiping them out with her sharp tongue and wit.

At the age of fourteen, Gooden was approached by neighbor and producer Marlon “Marley Marl” Williams to rhyme on an ‘answer track’ he was working on. Williams used the beat from the song “Roxanne Roxanne” by the Brooklyn rap group U.T.F.O. and released “Roxanne’s Revenge” in 1984 featuring Gooden. The track hit number 22 on the R&B/ Hip Hop charts, and Gooden legally changed her first name from Lolita to Roxanne. The track also sparked The Roxanne Wars, a series of tracks that were responses to the hit song. Gooden joined The Juice Crew, which included Big Daddy Kane, Biz Markie, MC Shan, and Kool G Rap. She began to tour with the group and in 1985 released with Sparky D, “Round One, Roxanne Shante vs Sparky Dee,” on Spin Records.

Gooden became mother to son, Kareem, at the age of fifteen, the same year she became known as the first female battle rapper. She took on KRS-One of Boogie Down Productions in what became infamously known as “The Bridge Wars” between the rappers of Queensbridge and the Bronx. Her 1987 “Have a nice day” track was answered by KRS-One with “The Bridge is over.” Her subsequent singles called out female rappers, MC Lyte, Queen Latifah, and Monie Love. Gooden released her debut album Bad Sister in 1989 with Cold Chillin’ Records/ Warner Bros which peaked at number 52 on the Top R&B/ Hip Hop Album chart.

The Bitch Is Back was released in 1992 with Livin’ Large/ Warner Bros, and a Greatest Hits album came out in 1995 under the Cold Chillin’ label. Her extended play (EP) Thin Line was released in 1995 on the Salmon Records label. At the age of 25 Gooden retired from the hip-hop scene. She appeared in a series of commercials for Sprite, made a cameo appearance in the cable network VH1 hip hop reality show Ms. Rap Supreme, and had roles in the movies Colors (1988), Lean On Me (1989), and Girls Town (1996).

In 2004 Gooden spoke at length in the documentary The Beef II, describing how she assumed an alias to attend Marymount Manhattan College due to domestic violence. She later claimed she completed college in 2008, and then earned M.A. and Ph.D degrees in psychology from Cornell University. Gooden later apologized for the false claim. The 2008 musical drama film Roxanne Roxanne, released on Netflix in 2018, was a biopic about her life story, featuring Mahershala Ali as Gooden’s father ‘Cross’, and Nia Long as her mother, ‘Ms. Peggy’. In 2009, Gooden revealed her battle with breast cancer. She lives in New Jersey and co-runs a non-profit organization.