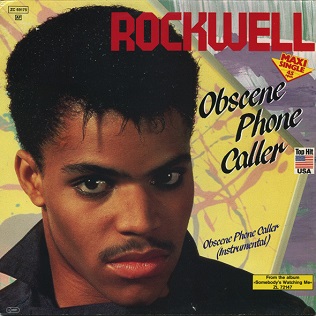 Rockwell, who goes by the selected stage name to avoid charges of nepotism, was born Kennedy William Gordy on March 15, 1964, in Detroit, Michigan, to Berry Gordy, founder of the Motown record label, and Margaret Norton. He has seven siblings, Berry IV, Hazel, Kendal, Kerry, Rhonda, Sherry, Stephen, and Terry Gordy. Kennedy graduated from Beverly Hills High School, California, in 1982. Rockwell wanted his career to be promoted without his father’s influence and signed a contract with Motown in 1983 without Berry Gordy’s knowledge.

In 1984, Rockwell released his first single, “Knife” but it did not chart. He then wrote, co-produced, and arranged his next single, “Somebody’s Watching Me,” which was included in his debut studio album of the same name that was also released in 1984. This song benefited from the talents of Michael Jackson, who was the guest vocalist and the background vocals of Jermaine Jackson although neither were credited.

In 1986, Rockwell released the single “Obscene Phone Caller” that reached no. 9 on the R&B chart and stayed charted for 14 weeks. It was the last record to reach the charts. Rockwell continued to perform and appeared on American Bandstand, Soul Train, and other television dance programs but his recording career was in decline. Rockwell retired from singing in 1991 at the age of 27.

2009 “Somebody’s Watching Me” was heard in Geico’s commercials in 2009 and was included in the 2011 film I Am Number Four. In July 2010, Rockwell married Nicole Moore but the marriage ended in divorce a year later because of “irreconcilable differences.”

In 2021 Rockwell released a new version of “Somebody’s Watching Me.” It reached no. 86 on the Billboard Global 200 and stayed there for only 2 weeks.