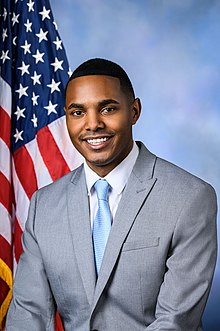 Ritchie John Torres is a Democratic politician in the state of New York, representing the 15th congressional district. Torres was born on March 12, 1988 in the Bronx, New York. He identifies as Afro-Latino, as his mother is African American and his father is Hispanic and from Puerto Rico. Torres’ father was married to another woman and was not around in his youth. The two reunited when Torres was 15. Torres’ mother raised him, his twin brother and their sister in the Throgs Neck public housing project located in East Bronx. He was frequently hospitalized for asthma as a result of mold and leaks in the apartment.

Torres came out publicly as a gay man in his junior year of high school. He wanted to be a lawyer and was the captain of the law team, participating in moot courts and mock trials. Torres was also chosen for a program called “District Manager for a Day,” and shadowed Jimmy Vacca, a Bronx politician. He attended Herbert H. Lehman High School, located in the Bronx, and graduated in 2008. The same year, Torres was a member of the inaugural class of the Coro New York Exploring Leadership Program.

After graduation, he worked as an intern in the offices of the mayor and attorney general and volunteered for Vacca as he ran successfully for councilman. Torres briefly attended New York University but dropped out in his second year due to severe depression about his sexuality, including suffering from suicidal thoughts. Torres returned to working with Councilman Vacca, and soon became a key staffer and housing director when Vacca was named deputy leader of the New York City Council.

In 2013, Torres decided to run for council member of the 15th district of New York. When Torres won, he became the first openly gay Afro-Latino member, the first openly gay candidate elected in the Bronx, and the youngest elected official of the year. As one of his first actions, he held a New York City Council hearing in a public housing project so constituents would have the rare opportunity to observe governance up close. He eventually became chair of the council’s Committee on Public Housing, and also chaired the Oversight and Investigations Committee. Torres was a delegate for Bernie Sanders at the 2016 Democratic National Convention and has been a strong supporter of Israel.

Torres served as council member from 2013 to 2020. While there he helped pass over 40 pieces of legislation. In July 2019, he announced his decision to run to succeed the retiring 15th district representative, Jose E. Serrano. Torres won the November 2020 election, making him the first openly gay Afro-Latino elected to Congress. He assumed office in January 2021 and is currently one of the nine co-chairs of the Congressional LGBTQ+ Equality Caucus in the 117th U.S. Congress. Torres lives in the South Bronx and is a member of the Committee on Financial Services and also serves as vice chair of the Committee on Homeland Security.