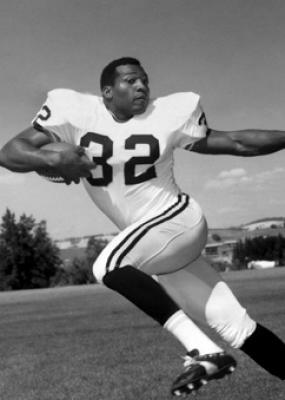 Ray Douglas McDonald was a running back who played for the Washington Redskins in the National Football League (NFL) for two seasons, 1967 and 1968. McDonald was also one of the first gay athletes in the NFL.

The McDonald family moved to Alamogordo, New Mexico in the 1950 where Ray eventually attended Alamogordo High School during his freshman year. He played for the school football team. The family later relocated to Caldwell, Idaho where he attended Caldwell High School and played on the school football, basketball, and track teams. At 6’2 and 220 pounds he was a high school All-American before graduating from Caldwell in 1965.

McDonald then attended the University of Idaho where he where he played fullback for the Idaho Vandals football team. Known as “Thunder Ray,” he led the nation in rushing in 1966 with 1,329 yards. During his three years with the Vandals he became a two-time all-American athlete (1965 and 1966) and rushed for 2,916 yards and 39 touchdowns. He also played on the Vandals track and field team where he participated in the hurdles and discus throws before graduating in 1967 from the University of Idaho in 1967 with a degree in physical education.

In 1967, now 6’4 and 248 pounds, McDonald was drafted by the Washington Redskins in the first round of the NFL Draft. He was a personal choice by Redskins owner Edward Bennett Williams and signed a three-year guaranteed contract for $100,000. Despite a promising NFL career, McDonald became controversial when in 1968 he was arrested by District of Columbia police for having sex with another man in public.

With injuries playing a role in shortening his career as well, McDonald was out of the NFL by 1969. After leaving the League he returned to school and received a degree in music education at the University of the District of Columbia. He later attended Harvard University where he received a master’s degree in education. McDonald taught music at the Patricia Roberts Harris Educational Center and served as the longtime Minister of Music at the Christ Holy Tabernacle, both in Washington D.C. After an extended illness, Ray Douglas McDonald died on May 4, 1993 in Parkland Hospital in Dallas due to AIDS-related complications, three days before his 49th birthday.