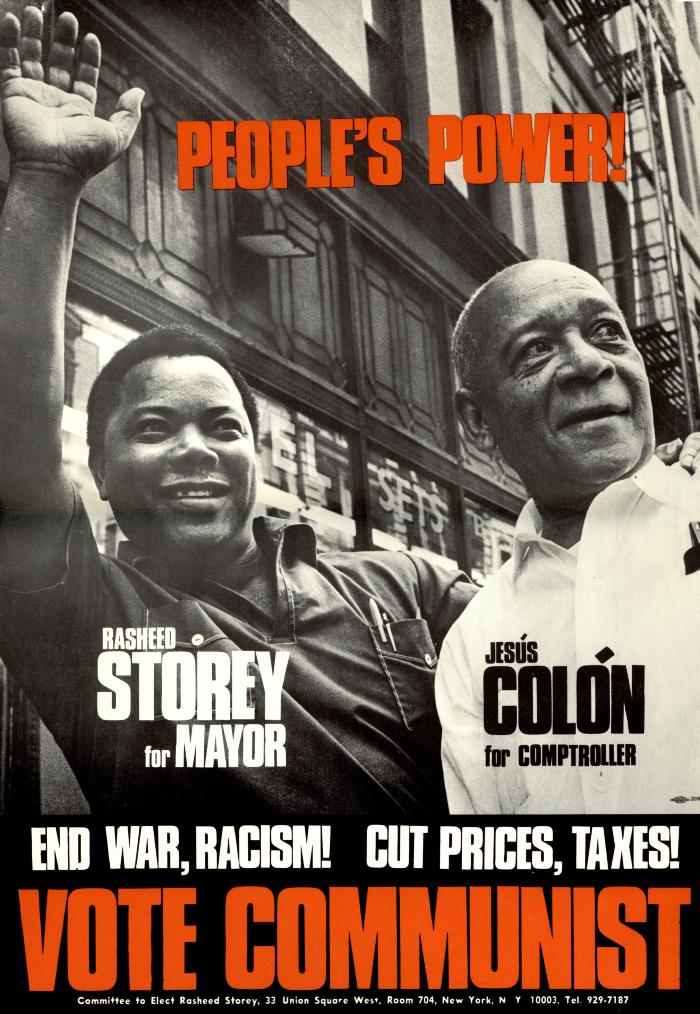 A second-generation Communist, in the 1950s, Storey worked in a New York City factory and as a Harlem Communist Party organizer. In 1961, he married Conneaness H. Gibson, had two children, and lived in Brooklyn’s Stuyvesant Heights. In 1968, he replaced NY Communist Party (CPUSA) Chairman Gilbert Green as party chair. Storey campaigned for NYC mayor in 1969 with Afro-Puerto Rican Comptroller-aspirant, Jesús Colón. The first Communist to run for NYC mayor since Robert Minor in 1933, Storey asserted that Democratic and Republican Parties were captured by “racist, ultra-right, fascist candidates.” He received 4,018 votes of the one million votes cast, on a platform calling for increased public assistance, drug addiction decriminalization, community policing, a subway-fare cut, and a $100-weekly minimum wage.

In 1970, Storey ran for New York Governor on the Communist Party ticket with Lieutenant Governor candidate Grace Mora Newman. He was the CPUSA’s first NY gubernatorial candidate since 1942, and ran on a platform that called for an end to Southeast Asian wars and the liberation of Blacks, Puerto Ricans, Mexicans, and Indians. Storey received 7,760 votes out of six million cast but he did outpoll the Socialist Labor and Socialist Worker Parties’ candidates. By 1971 Storey was a member of CPUSA’s Black Liberation Commission.

Storey moved to Pittsburgh’s Point Breeze and Homewood districts in 1973, where he organized for the CPUSA Central Committee, Socialist Workers Party, and Western Pennsylvania Communist Party. He called for school integration and community-controlled policing. In unsuccessful bids for a school board and Pennsylvania House seats, Storey proposed no property taxes on incomes under $25,000 and big industry tax-increases, asserting “the superrich in this city get away scot-free.” He drew 237 votes in 1976 and 218 votes in 1980 in races that drew 50,000 voters.

In 1991, Storey joined hundreds of CPUSA members in “An Initiative to Unite and Renew the Party.” Most signatories left CPUSA to create the Committees of Correspondence for Democracy and Socialism. He admonished U.S. Representative Chaka Fattah for dismissing the 1995 Million-Man March, and condemned the Republican Party’s Contract With America as a “declaration of war on poor people, and the sharpest edge of that war is directed at Black people.” At 80-years old, Rasheed Storey died in Philadelphia on August 23, 2016.