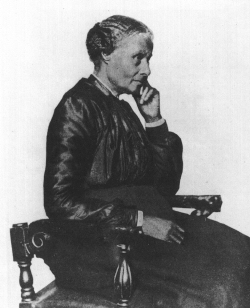 Mary Ellen Pleasant was born on Aug. 19, 1814 in Virginia and spent her early years in Nantucket, Massachusetts.  She worked as a bond servant to the Hussey family, an abolitionist family.  She later married James Smith, a wealthy former plantation owner and an abolitionist.  Mary Ellen and James worked on the Underground Railroad.  After Smith’s death four years later, Mary Ellen continued her work as a conductor on the Underground Railroad.

Mary Ellen married John James Pleasant around 1848.  To avoid trouble with slavers for their abolitionist work, the couple moved to San Francisco, California in April 1852.  Mrs. Pleasant established several restaurants for California miners, the first named the Case and Heiser.  With the help of clerk Thomas Bell, Mrs. Pleasant amassed a fortune by 1875 through her investments and various businesses by 1875.  She also helped to establish the Bank of California.

Pleasant earned her title as the “Mother” of California’s early civil rights movement, establishing the local Underground Railroad.  She financially supported John Brown from 1857 to 1859.   In the 1860s and 1870s, Mrs. Pleasant brought several civil rights lawsuits in California, especially against the trolley companies, most of which she won.

During the 1880s, a smear campaign by the widow of Thomas Bell damaged Mrs. Pleasant’s reputation.  Local newspapers began to taunt her with the pejorative title “mammy,” which she reportedly hated.  She never recovered her prestige from this campaign. Mary Ellen Pleasant died on Jan. 4, 1904.