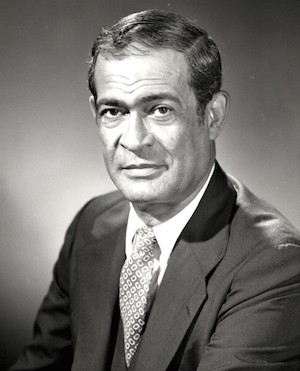 Henry G. Parks, Jr., is best known as the founder of H.G. Parks, Inc., the first black corporation to be listed on the New York Stock Exchange. He was born Henry Faris Parks in Atlanta, Georgia on September 29, 1916 to Henry Green Parks Sr., of Atlanta, Georgia, and Gainelle Esther Williams, of Birmingham, Alabama. He was raised, however, in Dayton, Ohio when his parents moved north.

Parks’ first management job after completing the Ohio State University was with the Resident War Production Training Center in Wilberforce, Ohio, in 1939. Prior to that position he was Director of the National Youth Administration (NYA) project at Wilberforce University. In 1940, Parks became one of the top salesmen for the Pabst Brewing Company but when he was denied promotion to management, he resigned. In 1942, he became part-owner of a two man public relations business, W. B. Graham Associates, in New York City. By 1948, he was part-owner in the Crayton Sausage Company of Cleveland, Ohio. While maintaining an office in New York City and his ownership interest in Crayton Sausage, Park moved to Baltimore in 1949 where he became a real estate broker, owner of two drug stores in black neighborhoods, and a cinderblock business.

In 1951 Parks established the Parks Sausage Company which he headquartered in Baltimore, Maryland. The following year the United States Department of Agriculture agreed to regular inspection of Parks Sausages. With the government guarantee of the quality of his products, within two decades, Parks was operating a multimillion-dollar corporation selling his pork products as far north as Connecticut and as far south as Virginia.

The success of Parks Sausage Company caught the attention of corporate America. By 1968 Parks appeared on the cover of Business Week. Soon afterwards he joined the board of directors of First Pennsylvania Corporation, Magnavox, W. R. Grace and Company, and Warner Lambert. In January 1969 Parks took Parks Sausage public and it became the first African American firm listed on the New York Stock Exchange. Between 1951 and 1977 Parks Sausage Company never posted a losing year. Company sales reached a record $14 million in 1976. On May 20, 1977, the Norin Corporation acquired more than 95% of the outstanding common stock of the Parks Company and Henry retired from the business at the age of 61.

Success in the corporate world led to recognition in other areas. In 1963 Parks was elected to the Baltimore City Council and served two consecutive terms. By this time he was also a life member of Alpha Phi Alpha Fraternity and the National Association for the Advancement of Colored People (NAACP) and he continued his work with the National Urban League. In 1969, Parks became the first African American to serve on the Board of Trustees of Goucher College in Baltimore. In 1970, Parks was elected to the board of trustees of Provident Hospital in Baltimore County and Baltimore City respectively. In 1982, Parks was designated a Distinguished American by the United States Congress.

(Bloomington, IN: Xlibris LLC, 1994); Lawrence Freeny, “For
Henry Parks…More Than Sausages,” New York Times, April 10, 1977; Bob
Lockett, “The Remarkable Henry Parks, This wonderful story of a man who
is blazing a trail for black businessmen of tomorrow,” Baltimore Sun,
1968.