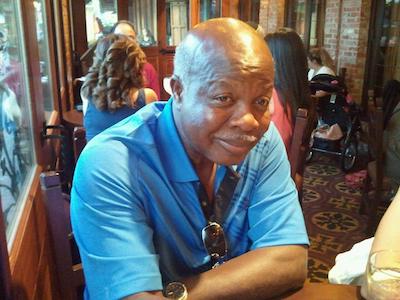 African American LDS activist Eugene Orr was born on March 16, 1946, to David Orr and Martha Wilder Orr in Ashburn, Georgia. The family was deeply religious and planned for young Orr to become a minister. As a child, Orr would sometimes put corn silk into bottle tops to form his congregation and would preach to his imaginary listeners.

In 1968 Orr came west through his participation in the Job Corps program at Thiokol Hill Air Force Base in Clearfield, Utah. It was there that he became acquainted with members of the Church of Jesus Christ of Latter Day Saints, the most influential being Leitha Marintha Derricott, a white woman with a deep heritage in the faith, who arranged to have LDS missionaries teach him. When Orr asked about the LDS doctrine of denying priesthood and temple privileges to all of visible African descent, one of these missionaries assured him that he need not worry about it as he would become white when he became more righteous.

Orr recognized that falsehood but pursued his gospel study regardless. He was baptized on August 24, 1968, in the Salt Lake Tabernacle. On November 23, 1968, he married Leitha Derricott, something her family strongly condemned, believing that her blood would be tainted by her association with a black man. Orr was twenty-three at the time of this marriage, and Leitha was forty-eight. Each had children from prior marriages; Orr brought two and Leitha brought five into the union.

Eugene and Leitha Orr initiated Black Mormon “reunions” in the summer of 1969 and hosted large meals in their back yard. These picnics included descendants of the black Mormon pioneers, though most of the descendants at that point had joined other denominations. These gatherings, attended by around fifty people, were the precursors of the LDS Genesis Group, a support group for black Mormons established in 1971. Eugene Orr was a founding member and the second counselor to Genesis president, Ruffin Bridgeforth, with Darius Gray as the first counselor. Among this group, Orr was known as the “firebrand,” pressing for priesthood. The Relief Society, a women’s group within Genesis, was headed by Lucille Bankhead with Leitha Orr as her first counselor.

In meetings preparing for and establishing the Genesis Group, Orr, Gray, and Bridgeforth met frequently with church leaders Thomas Monson, Boyd Packer, and Gordon B. Hinckley, who invited them to participate in the October General Priesthood session of 1971 when the priesthood was still restricted from black men. When Eugene Orr arrived at the session, an usher grabbed the chain between the stanchion posts and fastened it, blocking Orr’s entrance. The usher said, “This meeting is for priesthood bearers only.” Orr contemplated his situation and then unfastened the chain and entered, going directly to the stand to sit beside Boyd Packer, who said, “Glad you could come, Brother Orr.”

Eugene Orr was a loyal member of Genesis for a year but ultimately could not adjust to the pervasive racism in Utah. He and his family moved to Barrhead, Alberta, Canada, where he became a naturopathic health counselor.

Leitha Orr died on August 4, 2013. Orr married Anne Irwin in 2015. He and one of his sons remain active in the Mormon faith and still live in Alberta, Canada.