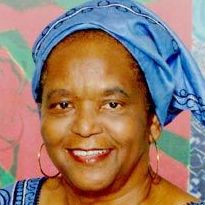 Niara Sudarkasa, born Gloria Albertha Marshall, was an accomplished scholar, educator, and cultural anthropologist. She was born on August 14, 1938, in Fort Lauderdale, Florida, to Rowena Marshall. Her mother and maternal grandparents, a farmer and a housewife, who migrated from the Bahamas, raised her and her three brothers, George Jr., Ralph, and Reese. Sudarkasa married John L. Clark, director of physical facilities at Lincoln University, and the couple had a son, Michael Sudarkasa.

Sudarkasa excelled at Dillard High School in Fort Lauderdale before she entered an early-admissions program at Fisk University at age 14. In 1957, she transferred to Oberlin College, where she earned a double Bachelor of Arts degree in anthropology and English. Sudarkasa earned a Master of Arts (1959) and a Ph.D. (1961) in anthropology from Columbia University. She then spent six months studying the Yoruba language and culture at the School of Oriental and African Studies in London. At the beginning of her twenty-one months of fieldwork, she studied at the University of Ibadan before moving to Awe, a rural town, where she studied the impact of Yoruba women’s economic activities on their gender roles within the family.

Sudarkasa traveled to twenty-seven African countries while researching in West Africa, the Caribbean, and the United States. Her research interests included West African trade and migration, development, and the roles of African women. Her extended family upbringing likely fueled her interest in extended families in the African diaspora.

In 1972, Sudarkasa became the youngest scholar elected to the executive board of the American Anthropological Association. In 1981, she was the first African American woman director of the Center for Afroamerican and African Studies at the University of Michigan and served as associate vice-president of academic affairs. In 1986, Sudarkasa left Michigan to be the eleventh and the first woman to serve as president of Lincoln University in Pennsylvania. She retired from the presidency in 1998.

In 2001, Sudarkasa became the first African American to be installed as a chief in the historic Ife Kingdom of the Yoruba of Nigeria. She was awarded thirteen honorary degrees throughout her career. On May 31, 2019, Niara Sudarkasa died in Fort Lauderdale, Florida after a long struggle with several chronic diseases. She was 80 at the time of her death.