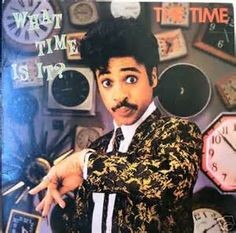 Multi-talented musician Morris Eugene Day was born on December 13, 1956, in Springfield, Illinois, to LaVonne Daugherty. When he was eight years old, however, his family moved to Minneapolis, Minnesota. There he privately studied the piano and percussion, but his passion was always the drums. Day attended Bryant Junior High School and graduated from North High School in 1974.

From 1973 to 1976, Day was the principal percussionist and composer with the Minneapolis Grand Central Band, Prince’s (Rogers Nelson) first band; he was two years older than his best friend who was born on June 7, 1958. Day’s mother was the amateur manager of the band.

Three years later, in 1984, Day was introduced to a global audience when he co-starred in the musical film Purple Rain, playing himself as a bandleader. This project overlapped with the production of the album, The Oak Tree. It peaked at number 3 on Billboard R&B/Hip-Hop in 1985 and remained charted for 18 weeks. Day co-wrote and produced the single, “Jungle Love” that reached 20th position and charted for 25 weeks. The following year, 1986, the album, The Color of Success reached number 15 and remained charted for 17 weeks, as well as The Character which peaked at number 34 and stayed on the charts for 11 weeks.

Day and Judith Jones divorced in 2011 after being together for 25 years. He then married Lorena Day in 2012. Morris Eugene Day’s vocal style and musical reach were pivotal in the Midwestern dance scene of the 1980s.

Elias Leight, “Prince Was Never Afraid of Any Band. Then He Created the Time,” https://www.rollingstone.com/music/music-features/morris-day-prince-the-time-anniversary-1188551/amp/; Derek Scancarelli, “Morris Day On His Life With Prince: From ‘Purple Rain’ To A Godly Ultimatum,” https://www.forbes.com/sites/derekscancarelli/2019/10/29/morris-day-on-his-life-with-prince-from-purple-rain-to-a-godly-ultimatum/amp/; Craig Harris, “Morris Day,” Allmusic.com, https://www.allmusic.com/artist/morris-day-mn0000930642/biography.