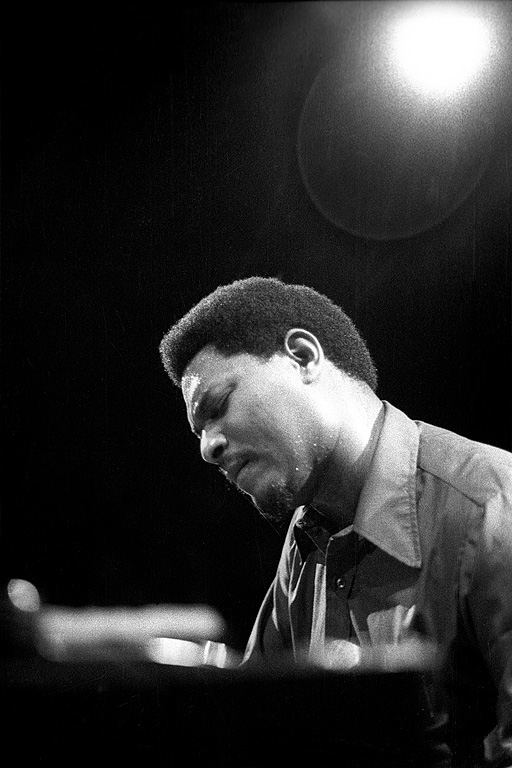 Alfred McCoy Tyner was a Jazz pianist who was best known for his association with the John Coltrane Quartet. Tyner held a strong commitment to the acoustic piano, while other musicians adopted the electric keyboards and synthesizers. He was left-handed and played with a low bass left hand while raising his arm high above the keyboard, for an emphatic attack. His right hand was staccato. Over the years he became one of the most influential and recognizable Jazz pianists in history.

Tyner was born in Philadelphia to parents Jarvis and Beatrice Tyner on December 11, 1938. At age 13, he began taking piano lessons. His mother ran a beauty salon out of their home and the family had a piano in the home, which was unusual in that neighborhood. In a 1963 interview with DownBeat magazine, Tyner stated, “Bud Powell and his brother were living just around the corner for me in Philadelphia,” further stating that, “but they didn’t have a piano in their apartment, Bud came to my mother’s house to play.”

Tyner studied at West Philadelphia Music School and later at the Granoff School of Music where he learned classical theory and harmony. During his high school years, Tyner began playing professionally in and around Philadelphia and quickly became a part of the jazz scene. As a teen, he led his own group, the Houserockers.

In 1959, Tyner joined trumpeter Art Farmer and saxophonist Benny Golson in a group called The Jazztet and made his debut recording, Meet the Jazztet In 1961. That same year, Tyner played on Coltrane’s album My Favorite Things (1961). Six months later he joined the John Coltrane Quartet that included Jimmy Garrison and Elvin Jones. Between 1961 and 1965, the band toured almost nonstop while recording the albums Coltrane Live at the Village Vanguard (1962), Ballads (1963), Live at Birdland (1964), Crescent (1964), and The John Coltrane Quartet Plays (1965), all on the Impulse label.

As Coltrane’s style began to change, especially with added percussion, Tyner embarked upon a solo career in 1965, feeling that his piano playing was being drowned out. Tyner first produced a series of post-bop albums on the Blue Note label from 1967 to 1970 that included The Real McCoy (1967), Tender Moments (1967), Time for Tyner (1968), Expansions (1968), and Extensions (1970). Next he signed with Milestone in 1972 and recorded albums Sahara and Echoes of a Friend (1972), Enlightenment (1973), and Fly with the Wind (1976). While at Blue Note and Milestone Tyner incorporated African and Asian elements in his music, playing such instruments as the koto, flute, harpsichord, percussion, celeste—instruments rarely heard in Jazz at that time.

During the 1980s and 1990s, Tyner formed a trio that included Avery Sharpe on bass and Louis Hayes on drums. With Blue Note he recorded Revelations (1988) and Soliloquy (1991). After signing with Telarc (1999) he recorded with several trios, and in 2004 released the Grammy Award Beat Instrumental Jazz Album Illuminations (2005).

Tyner was named a 2002 NEA Jazz Master. He won five Grammy Awards and was awarded an Honorary Doctor of Music degree from Berklee College of Music in Boston, Massachusetts. On March 6, 2020, Tyner died at his home in New Jersey on March 6, 2020 at the age of 81. He was survived by his wife Aisha, his son, Nurudeen, three grandchildren, and siblings Jarvis and Gwendolyn-Yvette.