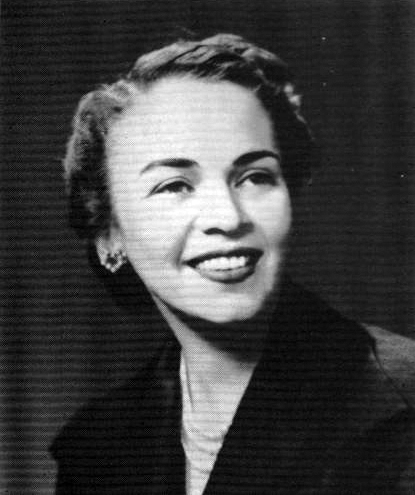 Activist, writer, and educator Margaret Just Butcher was born on April 28, 1913, in Washington, DC, to Dr. Ernest E. Just, the renowned scientist and advisor and incorporator of the Omega Psi Phi Fraternity, Inc. from Charleston, South Carolina, and Ethel Highwarden, one of the first Black female graduates of Oberlin College from Columbus, Franklin, Ohio. Margaret had one brother, Highwarden Just, and a younger sister, Maribel Just Butler.

Butcher, who was poly-lingual (French, Italian, German, and Arabic), graduated from M Street High School in the District of Columbia in 1930 and received the B.A. degree from The University of Pennsylvania in 1934. She also earned a Ph.D. from Boston University in 1947 and studied at the Université Paris-Sorbonne.

In 1935, Butcher taught English and Literature at Virginia University for one year and then in 1936 married Dr. Stanton L. Wormley, Dean of Men and Acting President of Howard University. They had one daughter, Sheryl Everett, but divorced after one year. She left Richmond to take a teaching position in the District of Columbia Public Schools, remaining there from 1937 to 1941. From 1942 to 1955 she was a Professor of English at Howard University. While there she assisted National Association for the Advancement of Colored People (NAACP) legal counsel and future U.S. Supreme Court Justice, Thurgood Marshall as a special educational consultant. During the summer of 1954 she led demonstrations opposing racial segregation in the District of Columbia.

In 1949 Margaret married James W. Butcher, professor of English and Theater at Howard University and the following year she became a Fulbright visiting professor in the humanities at the Université de Lyon and Université Grenoble Alpe in France.

When Butcher’s godfather, Dr. Alain LeRoy Locke, fell ill, he asked Butcher from his sickbed at Valley Forge Medical Center and Hospital in Phoenixville, Pennsylvania to complete his planned book, The Negro in American Culture. Locke died on June 9, 1954 and with her help, the book was published on January 1, 1957.

Margaret Butcher divorced James Butcher in 1959 before leaving Paris. Shortly afterward she headed the English Language Training Institute in Casablanca, Morocco from 1960 to 1965.

In 1968 with the creation of Federal City College (now the University of the District of Columbia), Butcher was invited to join the faculty. At the same time, however, she was also offered the position of assistant cultural attaché at the U.S. Embassy in Paris, France. She took the position and remained there from 1968 to 1971. In 1971 she returned to the United States and worked at Federal City College as the “Star Professor of English” until her retirement in 1982.

An active member of the Washington DC branch of the NAACP, she also served as a member of the District of Columbia Board of Education from 1953 to 1957, and a member of the National Civil Defense Advisory Council, Margaret Just Butcher, died on February 7, 2000, in Washington, D.C. She was 86.