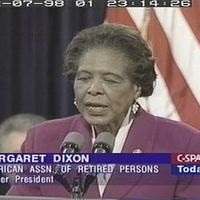 Margaret Abner Dixon, the first African American president of the American Association of Retired Persons (AARP), was born in Columbia, South Carolina, in August 8, 1923. She was reared by an aunt, Emily Clark Metz, and her grandfather, Mantle Birt Williams, as both parents died during childhood. In 1929, Dixon’s early education began at the segregated Waverly Elementary School, and she graduated from Booker T. Washington High School in 1941 in Columbia. She graduated summa cum laude from Allen University (AU), a Historically Black Colleges and Universities (HBCU) in Columbia in 1945 and then taught at Saxon Elementary School and Booker T. Washington High School.

From 1954 to retiring in 1980, Dixon was an educator in New York City with the Public Schools, holding such positions as pedagogic of physically challenged students, school principal, director of a computer-assisted early learning program, and supervisor for the principal of the Teacher Education Program at Brooklyn College. In 1981, she returned to South Carolina where she started a second career as an associate professorship and Director of Teacher Education at Allen University. She remained at AU until 1986. In addition, Dixon was a Consultant to the South Carolina Department of Education during this period.

Dixon worked at AARP for fourteen years in several positions, beginning in 1990 as Minority Affairs Spokesperson and then service successively as Secretary, Board Member; vice president, from 1992 to 1994; president-elect, from 1994 to 1996; and president, 1996 thus becoming the first African American to head the United States’ oldest and largest organization, leading the more than 30-million-member organization for seniors over 50.

Margaret Abner Dixon, a trailblazer and advocate for the older future, died at Bradford Oaks Nursing and Rehabilitation Center in Clinton, Maryland, on September 17, 2011. She was 88.