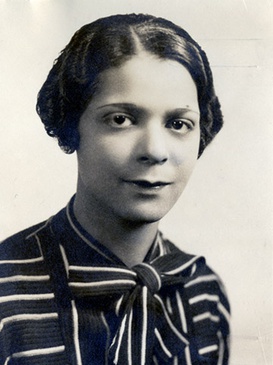 Mabel Byrd, a life-long educator, researcher, and civil rights activist, was the first African American to attend the University of Oregon. Born in Cannonsburg, Pennsylvania on July 3, 1895, Byrd was the youngest daughter of Robert Byrd, a bricklayer, and Jennie Byrd.

She moved with her family to Portland, Oregon around 1903 and graduated from Washington Heights High School in Portland in 1914. In 1917, she enrolled at the University of Oregon (UO) and was reportedly the only African American resident of the city of Eugene. Due to a school policy, she was barred from living in the dormitories and joining a sorority. Thus, she lived and worked as a domestic servant in a history professor’s home.

Majoring in economics, Byrd spent two years at UO before transferring to the University of Washington where she earned a bachelor’s degree in 1921. She moved back to Portland a year later to teach English at Portland’s segregated Young Women’s Christian Association (YWCA) and became its secretary. While there, Byrd was politically active serving as the vice president of the Portland NAACP chapter. In 1923, she invited W.E.B. Du Bois to speak at UO and the two formed a friendship.

In 1924, Byrd moved to New York to work with the New York branch of the YWCA. She also wrote for the Crisis magazine, the official publication of the NAACP and became president of the Alpha Sigma Chapter of Delta Sigma Theta Sorority. Byrd never forgot her Oregon roots and helped found the University of Oregon’s New York alumni chapter. By 1927, she was offered a Quaker scholarship to study England’s Settlement Movement and help alleviate poverty. After her studies, she accepted a position in Geneva, Switzerland with the League of Nations International Labor Organization, researching the status of African workers and championing fair labor practices. Two hundred guests in New York attended Byrd’s going away party, including Harlem Renaissance figures like Countee Cullen, Aaron Douglas, and Langston Hughes.

In 1930, Byrd moved back to the U.S. and continued her activist work and research. She secured a faculty position at Fisk University where she researched educational opportunities for African Americans in the South. She continued her graduate studies at the University of Chicago in 1931 and, in 1933, became the first African American to work for the National Recovery Administration, a major program of President Franklin Roosevelt’s New Deal. Byrd studied workforce inequities and created new rules to improve working conditions for nonwhite workers. She then joined the Joint Committee for National Recovery and investigated hate crimes. Later she testified before Congress regarding the New Deal programs’ failure to promote equality.

By 1934, Byrd served on the Chicago Women’s Committee Against War and was an active member of the American League Against War and Fascism, giving a keynote speech to Congress on eradicating racism and poverty. She sparked national outrage when Capitol police forcefully removed her from eating at an all-white restaurant in Capitol Hill. After reaching out to senators, her efforts helped to desegregate the Capitol’s facilities.