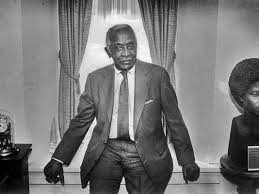 Civil rights attorney Louis L. Redding was the first Black man admitted to practice law in Delaware. He argued one of the cases that formed part of the United States Supreme Court Brown v. Board of Education decision.

Redding was born on October 25, 1901, in Alexandria, Virginia to Lewis Alfred Redding and Mary Ann Holmes Redding. His parents had both attended Howard University. The family relocated to Wilmington, Delaware, where his father worked for the post office and founded the Black YMCA in Wilmington. Redding attended Howard High School in the city where his teachers included Alice Dunbar-Nelson. Redding then attended Brown University, where he was the commencement speaker for his graduating class in 1923. He earned money for law school by working as an assistant principal at Fessenden Academy in Ocala, Florida. He then taught English at Morehouse College for one year. Redding was the only Black graduate in the Harvard Law School Class of 1928.

Redding returned to Wilmington where he became Delaware’s first black lawyer. Beginning in 1929, and for the following 26 years, Redding remained the state’s only Black lawyer but was not admitted to the Delaware Bar Association until 1949. His cases ranged from divorces and criminal defense to business mergers. During World War II, Redding was recruited to serve as a lawyer for the federal Office of Price Administration (OPA) office in New York City.

In March 1951, Redding undertook two new lawsuits, the first for Black high school students in Claymont, Delaware, who wanted to attend the all-white Claymont High School, and the second for a family in Hockessin, Delaware, asking for a school bus for their daughter. Redding and his co-counsel, Jack Greenberg, obtained an order requiring the state to provide the requested relief. The state appealed, and the cases became one of the five consolidated for argument in Brown v. Board of Education. As part of that landmark case, Redding argued several times before the United States Supreme Court from 1953 to 1954. In 1961, Redding again successfully argued a Supreme Court decision, Burton v. Wilmington Parking Authority, which held that segregation in public accommodations was not permissible.

In 1973, Redding received an honorary LLD from his alma mater, Brown University. The University of Delaware named one of the dormitories after Redding. The County-City building in Wilmington is also named after Redding and his statue is located in front of the building.

Louis Redding retired from practice in 1984 and died on September 29, 1998 near his home in Glen Mills, Pennsylvania. He was 97. Redding’s younger brother was J. Saunders Redding, a noted author and professor of literature.