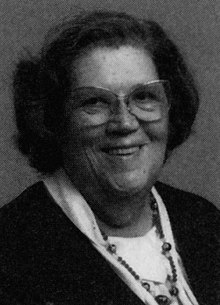 Dr. Ruth Smith Lloyd was the first African American woman in the United States to obtain a doctorate degree in Anatomy.  She earned her degree at Howard University in Washington, D.C. in 1941.

From 1937 to 1938, Smith studied for a Master’s degree in zoology at Howard University, supported by a fellowship from the Rosenwald Fund. On December 30, 1939, Smith married Sterling Morrison Lloyd, a physician and fellow Howard University graduate. Together they had three children: Marilyn, Sterling Jr., and David.

Lloyd then spent the next two years in doctoral studies at Western Reserve University in Cleveland, Ohio.  Lloyd began to specialize her studies in the fertility of female Macaque monkeys and upon graduation in 1941, she became the first African-American woman to earn a Ph.D. in anatomy.

Dr. Lloyd returned briefly to Washington, D.C. before becoming a faculty member at Howard University College of Medicine, a position she held until her retirement in 1977. She first taught Anatomy and Physiology, reaching the rank of associate professor in 1955. Her areas of research were endocrinology, sex-related hormones, and medical genetics. Dr. Lloyd also chaired the university’s Committee on Student Guidance and was director of the Academic Reinforcement Program.

She was a member of the Sigma Xi Honorary Scientific Society and the American Association of Anatomists. She was also a board member of All Souls Unitarian Church in Washington. Dr. Lloyd’s other memberships included the Girl Friends, Washington Chapter and she was a charter member of the National Museum of Women in the Arts, founded in 1987. Dr. Lloyd died in her Washington home of cancer on February 5, 1995 at the age of 78. She was survived by her three children and eight grandchildren.