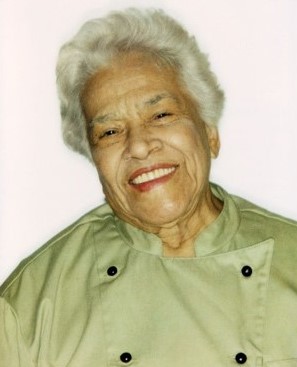 Dubbed the “Queen of Creole Cuisine” for her culinary genius, Leah Chase was an American chef, author, and TV personality who advanced the Civil Rights Movement as a celebrity chef. Chase was born on January 6, 1923 in New Orleans, Louisiana to Catholic Creole parents. As one of fourteen children, Chase spent her early years helping to cultivate her family’s Madisonville strawberry farm which started her appreciation for food. However, the Madisonville-area schools did not allow black children into Catholic high schools, so after finishing sixth grade, she returned to New Orleans to live with her aunt and attend the Catholic St. Mary’s Academy. After high school, Chase held short-term jobs in athletic management before entering the restaurant industry as a waiter at the Colonial Restaurant.

Shortly after, in 1946, Leah married jazz musician Edgar “Dooky” Chase II, whose parents ran a small street corner po-boy stand. Leah first started working at the family stand as a hostess before becoming a chef. Eventually, the couple took over the restaurant, transforming the sidewalk stand into a sit-down establishment: the Dooky Chase Restaurant.

Dooky Restaurant served as a central meeting place for blacks and whites to strategize together during the Civil Rights movement. Voter registrations, political forums, and NAACP gatherings were all welcomed. Despite Louisiana laws prohibiting such gatherings, the establishment’s overwhelming popularity prevented local officials from interfering with its activities. In its early years, the restaurant hosted Martin Luther King Jr., the Freedom Riders, and Ernest Morial, and later welcomed Presidents George W. Bush and Barack Obama.

Hurricane Katrina in 2005 forced the restaurant to close its doors. Committed to reopening the establishment, Chase joined “Women of the Storm,” a collective of women nationwide who worked to petition Congress for hurricane restoration funds. Their efforts were successful, and Dooky Chase reopened in 2007.

Leah Chase received accolades for both her culinary contributions and her activism. Awards for the former include NOLA.com’s “Best Fried Chicken in New Orleans” (2014), the James Beard Lifetime Achievement award (2016), and a gallery at the Southern Food and Beverage Museum in her honor (established in 2009). She has also been invited to appear on televised cooking shows such as Top Chef and inspired Disney’s first African American princess, Tiana. For her activist efforts, Leah was recognized with the National Conference of Christians and Jews’ Weiss Award, the National Council of Negro Women’s Outstanding Woman Award, the Francis Anthony Drexel Award, and multiple NAACP awards.

Chase remained a chef at the Dooky Chase until her death on June 1, 2019 at 96. She is survived by her four children, sixteen grandchildren, and twenty-two great-grandchildren. Her legacy lives on in the Chase Family Foundation, an organization advocating for youth education, the visual and culinary arts, and social justice.