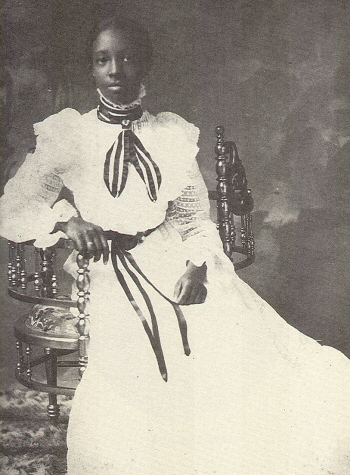 Despite its charm, Hawaii was a peculiar setting for a young black woman from Brooklyn, New York in the late nineteenth century. The third child of T. McCants Stewart and Charlotte Pearl Harris, Carlotta Stewart was born in 1881 in Brooklyn, New York, where she attended public schools during her formative years. Although her father had spent several years in Liberia, Africa, Carlotta had never traveled outside of the continental United States before coming to Hawaii. She was eighteen when she arrived in Hawaii in 1898, accompanying her father and stepmother.

The first evidence of Carlotta’s activities appears in 1902 when she graduated from the Punahou School, Oahu College. After graduation, Carlotta completed the requirements for a Normal School certificate, which she received in 1902, and promptly accepted a teaching position in the Practice Department of the Punahou Normal School in July, right after her graduation. Carlotta remained at the Normal School for several years where she taught English.

Carlotta’s decision to remain in Hawaii, rather than return to the mainland, proved to be an advantageous one, for by 1909 she had been promoted to principal of the Koolau elementary school. Stewart’s mobility in the space of seven years was an impressive achievement. While many black women had established careers in teaching and a handful as administrators by 1909, it was unusual for a black female at the age of twenty-eight to serve as principal of a multiracial school. Stewart’s upward mobility reveals that blacks were more likely to obtain professional jobs in Hawaii than in many West Coast cities, including San Francisco, Oakland, and Los Angeles (California), Portland (Oregon), and Seattle (Washington). Teaching and administrative positions would not be open to African Americans in most western cities until the 1940s.

By 1951, ill health forced Carlotta Stewart to enter a Honolulu nursing home. Her health declined rapidly, and on 6 July 1952, she died. Carlotta was a trailblazer, not only for black women in Hawaii, but for black women throughout the entire western United States. In many respects, her work remains a blueprint for what American society hopes, one day, to become.