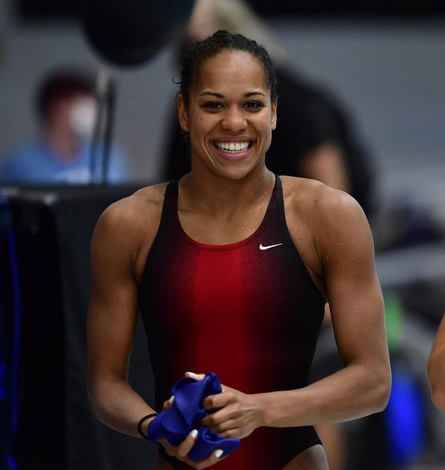 Kristen Nicole Hayden is the first African American woman to win a national diving championship. Born March 2, 1998 in Hillsborough, New Jersey, she is the second child of Kay and Glen Hayden. As a youngster she practiced gymnastics and swimming until age ten when someone suggested to the mother that she take up diving. It took time to adjust to what she calls the “rhythm and tempo” of diving as opposed to the strength requirement of gymnastics. During her teenage years Hayden joined West Chester Diving Club in Pennsylvania, the Duke Diving Club in Cary, North Carolina while attending Panther Creek High School, and the RipFest Diving Club in Moorseville, Indiana.

In 2021 Hayden finished fourth in the three-meter at the U.S. Olympic Team Trials and third in the three-meter at the USA Winter Diving National Championships. After two years at the University of Minnesota, Hayden decided to scale down collegiate competition in order to better prepare for qualification for the Olympic Games in Tokyo, prior to enrolling at Indiana University for the 2021-2022 season. It was during this period that she co-founded the USA Diving’s Diversity, Equity, and Inclusion Council.

On December 13, 2021, Hayden made history at the USA Diving Winter National Championship by earning first place with partner Quinn Henninger in mixed synchronized 3-meter springboard, thus becoming the first African American female to win an American national diving championship. She accomplished this while a graduate student in communication at Indiana University. Her achievement could be compared to that of Michael Wright, who in 2010 became the first African American man to win a national diving championship at the USA Diving Winter National Championships where he won the men’s one-meter springboard competition.

Hayden’s road to fame could not have been imagined early on since she suffered from a learning disability that required repetition to process and understand information and feedback. As a result, she was forced to shop for a diving club that conformed to her needs. She also revealed: “People didn’t like my body type. They wanted a very slender, small diver. I have broad shoulders…very narrow hips and I have muscle. I’ve also faced stereotypes of how an African American should act, or my hair — that was a big thing.” In March 2022 she placed second in the finals of the three-meter diving event at the NCAA Division I Women’s Championship. She states that her career goal is to be an ESPN sports broadcaster.