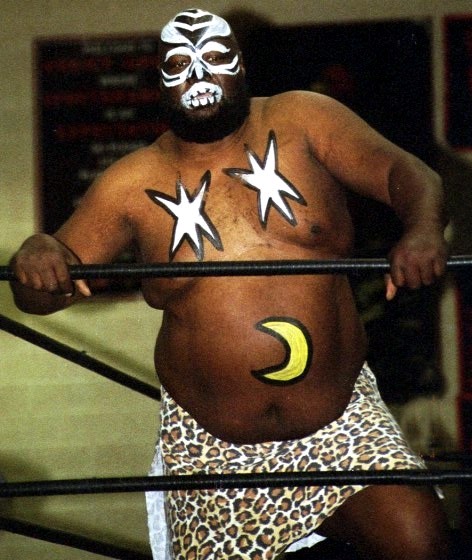 James Arthur “Kamala” Harris was a professional wrestler best known for his professional wrestling persona, Kamala, a fictional Ugandan giant. Harris was born on May 28, 1950, to Jessie Harris and Betsy Mosely in Senatobia, Mississippi. He had four sisters as well. Harris grew up in Coldwater, Mississippi where his family owned a furniture store. When he was four years old, his father was murdered after a dice game. Growing up, he worked as a sharecropper to help provide for the family. Harris dropout out of high school in the ninth grade and became a burglar.

In 1967, on the advice of police, Harris left Mississippi and moved to Florida where he worked a truck driver and fruit picker. He next moved to Benton Harbor, Michigan where he met a professional wrestler Bobo Brazil who became his trainer. In 1978, Harris made his professional wrestling debut as “Sugar Bear” Harris. One year later, in 1979 he won his first professional wrestling championship in the National Wrestling Association (NWA) Tri-State Tag Team competition with wrestler Oki Shikina. In 1980 he joined Southeastern Championship Wrestling as “Bad News” Harris and later that year won its championship. In 1982, Harris joined the Continental Wrestling Association (CWA) after being offer by a job by promoter Jerry O’Neal “The King” Lawler.

While wrestling for CWA, Lawler and another wrestling promoter, Jerry Winston Jarret, created a new wrestling character for Harris. This character, named Kamala, was a stereotypical Ugandan headhunter with face and body painting who was supposed to be the bodyguard of former President of Uganda Idi Amin. Harris then joined Mid-South Wrestling owned by promoter William Harris and remained with the organization until 1986.

Despite his long successful wrestling career, Harris had numerous personal and health related issues. In 2011, had his left leg amputated below the knee due to complications from high blood pressure and diabetes. A year later, his right leg was also amputated below the knee. As a result of the amputations, a charity fund was set up to help with his financial needs.

In 2016, Harris was part of a class action lawsuit filed against World Wrestling Entertainment claiming that wrestlers received traumatic brain injuries during their time with WWE. Unfortunately for Harris and other wrestlers, the lawsuit was dismissed by Judge Vanessa Lynne Bryant in 2018.

Harris was married twice during his lifetime, first to Clara Freeman. That marriage ended in divorce. He later married Emmer Jean Bradley and that marriage lasted until his death. He was also father six children, five daughters and one son.

In 2017, Harris underwent lifesaving emergency surgery to clear fluid from around his heart and lungs. His health problems continued. He was hospitalized on August 5, 2020, after testing positive from COVID-19 during the pandemic in Mississippi. Four days later, on August 9, Harris died from complications from diabetes and COVID-19 in Oxford, Mississippi. He was 70.