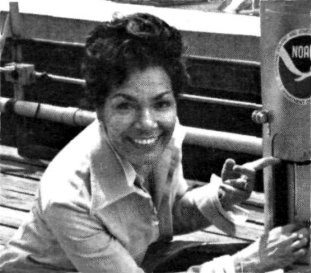 June Bacon-Bercey is best known for being the first on-air African American female meteorologist. Bacon-Bercey was also instrumental in making the atmospheric sciences more accessible to minorities and women. Born June Ester Griffin on October 23, 1928, Bacon-Bercey was raised in Wichita, Kansas by her aunt and uncle. Her advanced education began with an emphasis in math at Friends University in Wichita; but soon, her lifelong passion for science led her to transfer to the University of California Los Angeles (UCLA). In 1954, she became UCLA’s first African American woman to graduate with a bachelor’s degree in meteorology. That same year, Bacon-Bercey married her first husband, Walker J. Bacon Jr., a dentistry student at Howard University. Together, the couple eventually welcomed two children.

In 1954, Bacon-Bercey accepted a position as a weather forecaster and analyst with the National Oceanic and Atmospheric Administration’s (NOAA) National Weather Service (NWS). In 1959, Bacon-Bercey responded to a growing interest in the effect of atom bombs on earth’s atmosphere and left the NOAA to work as a senior advisor at the Atomic Energy Commission. By the early 1960s, she returned to the NWS as a radar meteorologist in New York. In 1971, she joined a Buffalo, New York NBC affiliate news channel as a science reporter.

During her tenure at NBC, an on-air meteorologist was arrested for robbing a bank, and Bacon-Bercey filled the vacancy making her the first on-air African American female meteorologist. The skill and intelligence she displayed during broadcasts caught the attention of the American Meteorologist Society. In 1972, Bacon-Bercey received the Seal of Approval for excellence in on-air meteorology and became the first woman and the first African American to receive the award. After leaving on-air meteorology in 1976, Bacon-Bercey worked as a chief of broadcasting for NOAA, as an administrator and training officer for the NWS, and as an aviation specialist in Northern California. She also earned a master’s degree in public administration from the University of Southern California in 1979.

Throughout her career, Bacon-Bercey continually used her outspoken drive to push the field towards accessibility for minorities and women. In 1975, Bacon-Bercey co-founded the American Meteorological Society’s Board on Women and Minorities. Through the board, she started a science fair program in 1976 to encourage students of color and girls in elementary and high school to pursue careers in science. Then in 1977, Bacon-Bercey used a portion of the $68,000 prize she won on the gameshow The $128,000 Question to create a scholarship with the American Geophysical Union to support women studying atmospheric sciences. She additionally aided Jackson State University, a historically Black university, in establishing their meteorology lab. Continuing her passion for encouraging young students, Bacon-Bercey, after leaving government work in 1987 to earn a teaching credential, dedicated the remainder of her career to teaching elementary and high school math and science classes.

June Bacon-Bercey passed away on July 3, 2019 due to frontotemporal dementia. Her legacy, however, continues with the scholarship she founded, which, per her final wish, will restart in 2021 for the first time since 1998.