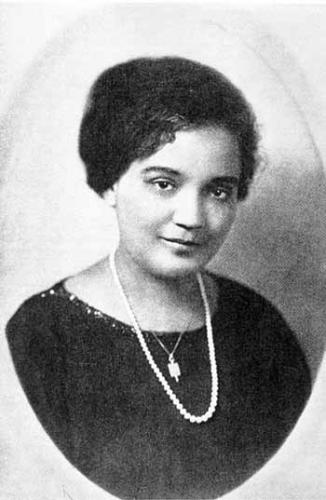 Jessie Redmon Fauset, known as the “Midwife of the Harlem Renaissance,” was born in Fredericksville, Camden County, New Jersey on April 27, 1882 to Redmon and Annie Seamon Fauset.  She was the seventh addition to an already large family. At a very early age Fauset lost her mother and was raised by her father, a prosperous Presbyterian minister. Fauset’s father made sure his daughter had a well-rounded childhood and education.

In 1900, Jessie Fauset graduated with honors from the renowned Philadelphia (Pennsylvania) High School for Girls and was the only African American in her graduating class. Following her graduation, Fauset received a scholarship to attend Cornell University in New York. In 1905, she became the first black woman accepted into the university chapter of Phi Beta Kappa, a prestigious academic honor society. Fauset graduated with a Bachelor of Arts in classical languages from Cornell University in 1909. Twenty years later she received a Master of Arts in French from the University of Pennsylvania.

In 1905, Fauset moved to Baltimore, Maryland to teach.  The following year, she relocated to Washington, D.C. and began teaching French and Latin for several years at Dunbar High School.  She resigned in 1919 and moved to New York City to become the literary editor for The Crisis, the official magazine of the National Association for the Advancement of Colored People (NAACP).  In her post, Fauset played a pivotal role in introducing the works of then unknown black writers such as Jean Toomer, Claude McKay, Countee Cullen, and Langston Hughes to the magazine’s national audience.

Fauset was an essayist, novelist, and poet as well.  Her published works include There is Confusion (1924), Plum Bun (1928), The Chinaberry Tree (1931), and Comedy: American Style (1933).  All of these writings focus on African American culture and economic struggles during that period.  Although Fauset brought the work of younger artists to the public’s attention during the Harlem Renaissance, she holds the distinction of being the most published novelist of that era.

Jessie Fauset left the Crisis in 1926 and returned to the classroom.  She taught at DeWitt Clinton High School in New York until her retirement in 1944.  Fauset married Hubert Harris, an insurance broker, in 1929 when she was 47.  They remained married until his death in 1958. On April 30, 1961, Jessie Redmon Fauset died in Philadelphia.