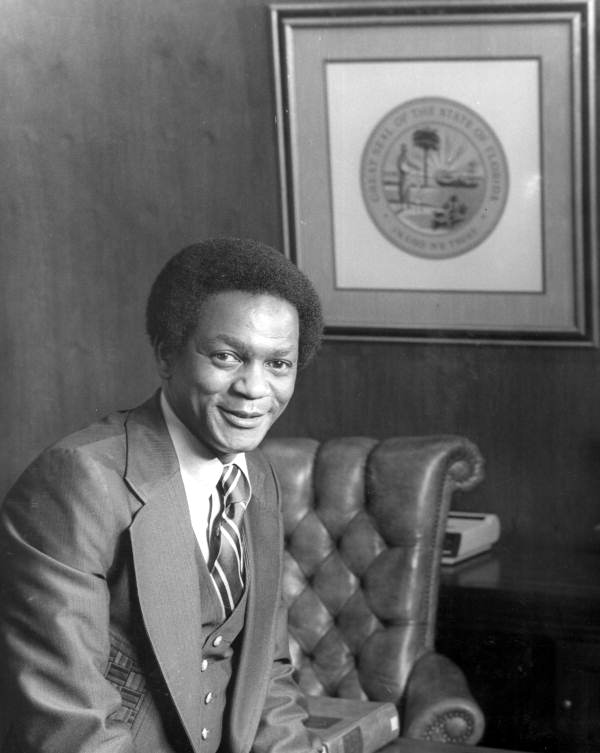 Jesse James McCrary, Florida Secretary of State from 1978 to 1979, was born on September 16, 1937, in Blichton, Florida. During his high school years, McCrary attended Howard Academy, a school for African American children in Ocala where he was the quarterback on the school’s championship football team. The school was established by the Freedmen’s Bureau during Reconstruction and named after abolitionist Union General O.O. Howard.

After high school, McCrary attended Florida Agricultural and Mechanical University (FAMU) from 1956 to 1960 where he excelled. He was a member of the debate team, the drama club, and an ROTC cadet. McCrary engaged in civil rights activism, organizing sit-ins in Tallahassee, while majoring in political science. Before he graduated from FAMU, he served in the Military Intelligence Corps. McCrary said that he developed an interest in law while serving on the FAMU honor court. He decided to go to law school and in 1965, McCrary graduated from the FAMU College of Law with his Juris Doctor.

In 1967, Florida State Attorney General Earl Faircloth took notice of McCrary’s ability and appointed him assistant attorney general. He was assigned to Miami and held that position for several years. In 1970, McCrary made history when, as assistant attorney general, he became the first Black lawyer to argue a case before the Supreme Court of the United States on behalf of a Southern State. He won that case, which was Williams v. State of Florida. That same year McCrary became a partner in the law firm McCrary, Ferguson and Leethrough.

McCrary often served as an advocate for poor African Americans and was interested in promoting racial integration. He was active in public service and served on many impactful committees including the Capital Punishment Study Commission, the Constitution Revision Commission, and the Commission on Judicial Reform. He was also the Dade Country School Board’s first Black attorney, and he was appointed to a Florida Industrial Commission judgeship by Governor Reubin Askew. At the time that he was appointed to that judgeship, McCrary was Florida’s highest-paid Black official. In 1971, McCrary was appointed head of a commission formed for the purpose of studying cases of riots in Opa-Locka’s black communities.

McCrary returned to private practice for five years, working as a partner in the law firm McCrary, Berkowitz, and David. In 1978, Governor Askew appointed him Secretary of State and he held that position until 1979. He was sworn in by Justice Joseph Hatchett, who was the only African American on Florida’s Supreme Court. McCrary’s position as Secretary of State was always meant to be temporary, as he was completing the term of Bruce Smathers who had resigned to run for the governorship of Florida.