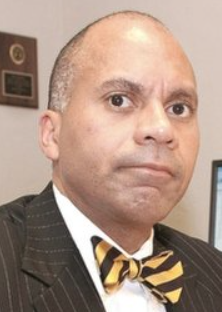 Jerome A. Holmes, is the first African American to serve as an United States Circuit Judge of the United States Court of Appeals for the Tenth Circuit. Holmes was born in Washington D.C. on November 18, 1961. His parents were Ryland and Hattie Holmes. Holmes graduated from Wake Forest University in 1983 with a Bachelor of Arts degree and then received a Juris Doctor degree in 1988 from Georgetown University Law Center. Holmes later earned a Master of Public Administration degree from the John F. Kennedy School of Government at Harvard University in 2000 and was a recipient of the John B. Pickett Fellow in Criminal Justice Policy and Management.

Holmes began his legal career serving as a law clerk in the United States District Court for the Western District of Oklahoma in 1988 for Judge Wayne E. Alley. Holmes then served as a clerk on the Tenth Circuit for another federal judge, William Judson Holloway, Jr. from 1990 to 1991. In 1991, Holmes entered private practice with the law firm of Steptoe & Johnson in Washington, D.C., serving there for three years.

Jerome Holmes returned to Oklahoma 1994 to serve as an Assistant United States Attorney for the Western District of Oklahoma where he was Deputy Chief of the criminal division. During that time, Holmes worked on the prosecution team for the Oklahoma City bombing that secured the convictions of death for Timothy McVeigh and a life sentence for Terry Nichols. In the aftermath of the September 11, 2001 tragedy, Holmes served for two and a half years as the Anti-Terrorism Coordinator in the Western District of Oklahoma, coordinating the federal, state, and local domestic and international terrorism initiatives until 2005. Subsequently, in 2005 Holmes returned to private practice, serving as a Director of the law firm of Crowe & Dunlevy in Oklahoma City until his nomination to the federal bench.

Holmes was first nominated to the United States Court of Appeals for the Tenth Circuit by President George W. Bush on February 14, 2006, to a seat vacated by Judge Stephanie Seymour, who assumed senior status on the court. However, President Bush withdrew the nomination on May 4, 2006 when the American Bar Association Standing Committee rated Holmes minority not qualified for the nomination. Despite their rating, Bush resubmitted Holmes’ nomination to the U.S. Senate on the same day.

On May 4, 2006, a hearing on Holmes’ nomination was held before the United States Senate Committee on the Judiciary where Oklahoma’s two Republican Senators, James Inhofe and Tom Coburn publicly expressed their support for the 45-year-old nominee. The Senate confirmed Holmes’ nomination on July 25, 2006, for the U.S. Court of Appeals for the Tenth Circuit, which hears appeals from the federal district courts of Colorado, Kansas, New Mexico, Oklahoma, Utah, and Wyoming. Holmes took the oath of office on August 10, 2006.

Holmes has served on numerous boards and committees including the Judge William J. Holloway, Jr. American Inn of Court, the American Bar Association’s Commission on Homelessness and Poverty, the Oklahoma City Museum of Art, and the Make a Wish Foundation. Holmes and his wife Jeri (Towler) live in Oklahoma City.