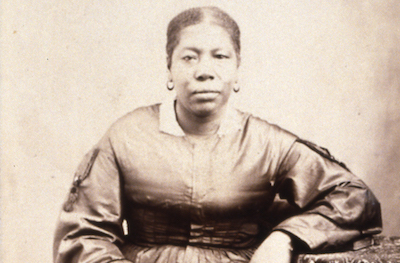 Jane Elizabeth Manning was born in Wilton, Connecticut, one of five children of Isaac and Phyllis Manning, a free black family.  Although Jane was a member of the local Presbyterian Church, she remained spiritually unfulfilled until 1842 when she heard the message of a missionary for the Church of Jesus Christ of Latter-day Saints (LDS/”Mormons“).  Soon afterwards she joined the Mormon Church.  One year following her conversion, Jane Elizabeth and several family members who had also converted decided to move to Nauvoo, Illinois, the headquarters of the Mormon Church.  After traveling by boat to Buffalo, New York, the African American Mormons, unable to pay additional fares, began an eight-hundred-mile journey by foot to Nauvoo. In Nauvoo, Jane lived and worked in the home of Joseph Smith, Jr. the founder of the LDS Church and his wife, Emma.

Following the 1844 murder of Joseph Smith, Jr. and his brother Hyrum in Carthage, Illinois, Mormon leaders under Brigham Young decided to abandon Nauvoo and look for a safe haven in the West away from forces hostile to the LDS Church.  In the fall of 1847, Jane, her husband Isaac James whom she married in 1841, and two sons traveled across the plains to the new home of the LDS Church in the Salt Lake Valley.  They were the first free black pioneers in the Mormon settlement and Jane would spend the remaining fifty-one years of her life in Utah.  They shared the hardships of their fellow Mormons and engaged in the spirit of mutual aid and cooperation that characterized LDS pioneer life.

By the 1880s Jane became increasingly concerned about her place in the afterlife. Well aware of the LDS Church’s proscriptions that prohibited blacks from full participation in the rituals that were prerequisite to being eligible for a place in the celestial kingdom, she nonetheless argued for an exemption because of her faith.  “Is there no blessing for me?” she asked Church leaders for more than a decade.  Those leaders refused her requests.  They attempted to pacify her by authorizing her limited participation in LDS rituals.  Through it all, Jane Manning James remained a devout Mormon and is generally recognized in LDS history for her unwavering faith.  Jane Manning James died in Salt Lake City in 1908.  A special monument to her is located in the Salt Lake City Cemetery, close to her gravesite, to commemorate her life and faith.