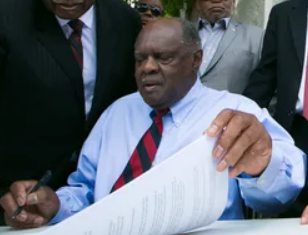 James H. Sills, Jr., the first African American mayor of Wilmington, Delaware, was born in North Carolina in 1931. We know little about his early life before he arrived in Wilmington. At various times he was a billiards hustler, farm laborer, and solider before he settled in Delaware.

In 1959 at the age of 28, he took a position with the Family Court of Delaware and along with wife Evelyn Prescott Sills, moved to the East Side of Wilmington, a predominantly black community. While working with the Family Court he began to volunteer at various community organizations such as the Peoples Settlement Association and the Association of Greater Wilmington Neighborhoods. He also served as president of the Wilmington NAACP.

From 1972 to 1997, Sills was a faculty member of the University of Delaware. While there he became the founding director of the Urban Agent Program. In 1987 he founded the Delaware Community Reinvestment Action Council. When a federal court issued a school desegregation order in 1978, he worked with the Wilmington Home School Community Council and School Decision Committee to establish the Parent Educational Resource Center, which assisted in making a smooth, nonviolent transition possible. His work with these organizations allowed Wilmington to avoid the contentious episodes that followed school desegregation in Boston, Los Angeles, New York, Chicago, Denver, and other major cities during this period.

Sills entered politics in the late 1970s when he was elected to the New Castle County School Board. He later served as Vice President of the Board. He also served on the Wilmington City Council being elected in 1984 to represent the Third District in the Delaware House of Representatives. Sills served eight years there until 1992.

To the surprise of many political observers and with solid black community support, 61-year-old Sills unseated two-term incumbent Dan Frawley in Wilmington’s September 1992 Democratic primary winning 54% of the vote this city of 71,000 where African Americans were about 50% of total. Sills faced a third-party candidate (The Delaware Party), Beatrice Patton Carroll, a black political activist in the November general election. On November 3, 1992 Sills beat Carroll, garnering 90% of the vote (20,700 to 2,160). In each effort he ran his campaign based on “family values” a concept he had touted since the 1970s where while not ruling out the impact of systemic racism, he also argued that “Many of the problems of the inner city begin with the families themselves.” Running again in 1996 he was reelected with 61% of the vote. He continued his community service and in appreciation the City of Wilmington in 2014 renamed the North Market Street Bridge near the East Side of Wilmington in his honor.

Sills continues to work for various initiatives and in 2014 he successfully arranged for the transfer of ownership of the Allied Kids Building to the African American Heritage Center to be used as a cultural addition to the predominantly black neighborhood.

James and Evelyn Sills have three children, James H. Sills III, Mark, and Julie. In 2014, James H. Sills III was named President and CEO of is now president of M&F (formerly Mechanics and Farmers) Bank in Durham, North Carolina, then the largest minority-owned bank in the United States.