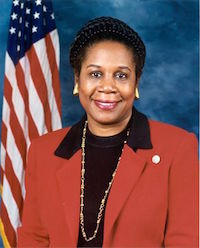 After graduating from law school Jackson-Lee moved to Houston, Texas after her husband, Dr. Elwyn C. Lee accepted a job offer from the University of Houston.  Dr. Lee is currently Vice Chancellor and Vice President for Student Affairs at the University of Houston.  Jackson-Lee was in private practice from 1975 to 1987 when she was elected a Houston municipal judge.  Jackson-Lee then ran for a seat on the Houston City Council in 1990.  In 1994 Shelia Jackson-Lee was elected as a Democrat to represent the 18th Congressional District of Texas.  She currently holds that seat.

Jackson-Lee currently serves on the Judiciary Committee in the House of Representatives and is the first vice-chairwoman of the Congressional Black Caucus.  She is a strong advocate of civil rights and abortion rights.  She has also used her position in Congress to raise awareness about racism and poverty in Africa.  Jackson-Lee has been a particularly strong opponent of the genocide in Darfur and has backed sanctions against Sudan.   In April 2006, Jackson-Lee was one of five members of Congress arrested, along with six other anti-genocide activists, while protesting outside the Sudanese Embassy in Washington, D.C.

Jackson-Lee is also the House Committee on Homeland Security and chairs its Subcommittee on Transportation Security and Infrastructure Protection.  Here the Congresswoman has called for increased security on rail and mass transit systems.  She has also worked to improve security around the nation’s nuclear and chemical plants as well as the electric grid.  Jackson-Lee serves on the House Science Committee and the subcommittee that oversees space policy and the National Aeronautics and Space Administration (NASA).