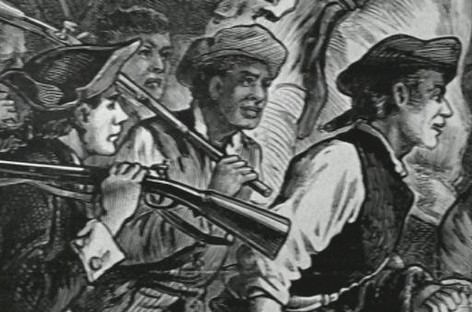 Jack Sisson was an enslaved African American who became a militia volunteer and was instrumental in the capture of British Gen. Richard Prescott in 1777 during the American Revolutionary War. Sisson was born around 1743 and was owned by Thomas Sisson of Tiverton, Rhode Island. Very little is known about Sisson’s early life but he was described as a tall, stout, and muscular man who answered to Tack, Guy Watson, and Prince.

Sisson appears into the historical narrative during a key point early in the war. Gen. Charles Henry Lee was second in command of the American armies during the Revolutionary War (1775-1783). Lee was captured by British dragoons (mounted infantry) on December 13, 1776, at Widow White’s Tavern in Basking Ridge, New Jersey. In those days, it was common for opposing sides to exchange officers of equal rank who were captured in raids or battles, but the Americans had no British officer of such rank to trade for Gen. Lee. While garrisoned at Fort Barton in Rhode Island in June 1777, Maj. Barton, second in command of the Rhode Island state militia, was informed by a Newport citizen that a commanding general of the British forces was residing in a nearby farm, and a plan was put in place for his capture.

Col. Stanton, the head of the Rhode Island state militia and commanding officer of Maj. Barton, ordered five whaleboats to be sent down from Providence for the raid. Barton asked for volunteers from the militia, and twenty white and 20 African Americans, including Sisson, volunteered their services. Sisson steered the lead boat that carried Barton and nine other men. The group left for the raid at 9 p.m. on July 4, 1777, with a 10-mile hard row ahead of them. A thunderstorm scattered the boats, and they regrouped at 1 a.m. the following day at the Warrick Neck Battery. They were unable to continue the journey until July 9.

After traversing the rivers, and narrowly missing detection, the group reached their destination, the Overling farm on Aquidneck Island. They moored in a small cove and waited until nightfall to begin the raid. Upon reaching the gatehouse, Sisson rushed the sentinel before he could raise an alarm, and the farmhouse was surrounded. With the colonel leading the way, Sisson followed closely behind as the group moved up the stairs that led to Gen. Prescott’s sleeping quarters. It is reported that Sisson used his head to force the locked door open and rushed in to capture Prescott. They quickly moved Prescott and his aide-de-camp Maj. Barrington back to the boats and returned to Warrick Battery without incident. The exchange of Prescott for Gen. Lee took place on April 21, 1778.

Songs of praise to Sisson were sung throughout the camp. Within a year of the raid, Sisson enlisted into the newly formed First Rhode Island Regiment, made up of mostly freemen and formerly enslaved men. Sisson fought at the Battle of Rhode Island and Yorktown. He remained with the regiment through the war and was given his freedom when it ended. Sisson died in Plymouth, Massachusetts, at the age of 78.