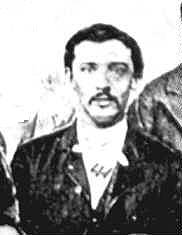 Henry E. Hayne was the first African American to serve as the South Carolina Secretary of State. He held that post from 1872 to 1877. Hayne was born into slavery on December 30, 1840 (estimated date), in Charleston, South Carolina to an enslaved mixed-raced mother whose name was Mary and a white father, James Hayne, who was a planter and state politician. Hayne grew up and was educated in Charleston. He worked as a tailor.

Hayne was a volunteer soldier in the Civil War for the Confederate army with the goal of eventually fleeing to the Union lines. In July 1862 Hayne cross enemy lines and joined Union forces, enlisting at Beaufort in the Thirty-third Regiment of United States Colored Troops (First South Carolina Volunteers), as a private. In 1863, Hayne was promoted to commissary sergeant. He was discharged in early 1866 and moved to Marion County, South Carolina.

During Reconstruction Hayne became active in the Republican Party, which had supported citizenship and suffrage for freedman. Hayne served on the Republican state executive committee in 1867 and represented Marion County in the 1868 state constitutional convention. Later in 1868 Haynes was hired by the Freedmen’s Bureau as principal of Madison Colored School. From 1869 to 1871 Hayne served as sub-commissioner for the South Carolina Land Commission.

Hayne was elected chairman of the Marion County Republican Party in 1870 and vice president of the State Union League. He then represented Marion County in the South Carolina State Senate from 1868 to 1872. Elected Secretary of State for South Carolina in 1872, he served until 1877. As secretary of state, he took charge of the land commission and was credited for bringing honest and efficient leadership to what had previously been a notoriously mismanaged program.

The Republican Party renominated Hayne for secretary of state in 1876. During that time Haynes also was serving as a member of the State Board of Canvassers, which certified a Republican victory in the intensely challenged election of 1876. The board was found by the State Supreme Court to be in contempt and some of its members were incarcerated for a period time. In May 1877, under intimidating pressure, Hayne surrendered his position as secretary of state to the Democratic candidate, Robert Moorman Sims.

In 1874, Hayne married. Later in 1877, Hayne move away from South Carolina. The last known residence of Hayne was Cook County, Illinois in 1885. At that time, he was living with his wife Anna M. Hayne. The date of Hayne’s death is unknown although there is one documentation of certification, number 00007313 located on the Office of the Illinois Secretary of State’s Statewide Death Index – Pre-1916 website, which records a date of death for a Henry Hayne on January 18, 1898, Chicago Illinois, Cook County at the age of 56.