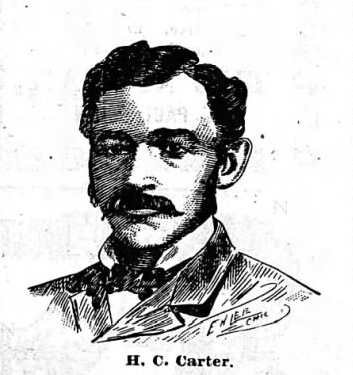 Hannibal Caesar Carter, the second African American to serve as Secretary of State in Mississippi, was born on February 11, 1835, in New Albany, Indiana. Though he spent his early childhood in Toronto, Canada, Carter received a common school education in New Albany. When he was old enough to work, Carter learned the barber trade and was later trained as a tobacconist.

Despite restrictions on African American movement, Carter managed to cross state lines to be among the first African Americans who volunteered to serve in a combat unit during the U.S. Civil War. He joined the 1st Louisiana Native Guard, an all-black regiment formed in New Orleans just before the Civil War began. It is unclear as to why he joined the Guard. Its stated purpose was originally to protect the interests of the citizens of New Orleans. When Fort Sumter fell and the Civil War began on April 12, 1861, the 1st Louisiana Native Guard became a unit in the Army of the Confederate States of America (CSA). After the war began Carter rose to the rank of captain and thus became one of the few black officers in the Confederate Army.

By early 1862, Union forces occupied New Orleans and southern Louisiana and on September 27 of that year, Union General Benjamin Butler accepted many members of the 1st Louisiana Native Guard into the Union Army. They became known as the Corps d’ Afrique 1st Louisiana Native Guard. Carter continued to serve and may have participated in the Battle of Port Hudson on May 27, 1863, where the Corps d’ Afrique participated in the battle that gave the United States control of the Mississippi River.

Once the Civil War ended Carter like many former officers of the Corps d’ Afrique became a leader in the Republican Party. He first represented Warren County as a Republican in the Mississippi House of Representatives from 1872 to 1873. He later served again, representing Warren County from 1876 to 1877. Carter was first appointed Secretary of State on September 1, 1873, and served until October 20, 1873, having been appointed after Hiram R. Revels, who was the first African American to serve in the United States Senate, resigned. The second time he was appointed Secretary of State, he served from November 13, 1873, to January 4, 1874. In later years, Carter changed his party affiliation to Democrat.

In 1881, after Reconstruction ended and Carter no longer had the opportunity to serve in office, he moved to Chicago, Illinois where he lived for the next twenty years. In the late 1880s he helped establish the Freedmen’s Oklahoma Immigration Association to encourage Southern African Americans to move west to Oklahoma Territory. Hannibal Caesar Carter died at his home in Chicago on June 1, 1904, at the age of 69.

Against All Odds, “Hannibal Caesar Carter (Warren County),” Much-Ado.net, http://much-ado.net/legislators/legislators/hannibal-c-carter/; The Appeal, “A Noted Figure of Chicago Joins the Majority in the Beyond,” Newspaper.com, June 11, 1904, https://www.newspapers.com/clip/20280233/hannibal-c-carter-death-1904/.