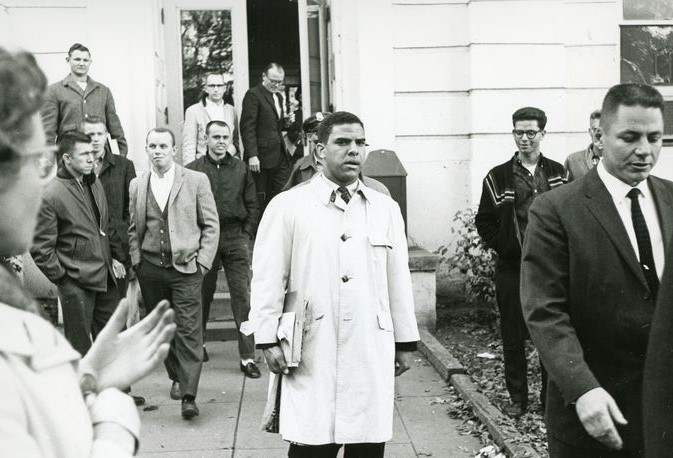 Hamilton Holmes at the University of Georgia

Hamilton Earl Holmes was the lesser known of the Black duo who desegregated the University of Georgia in 1961. He was born July 8, 1941, in Atlanta, Georgia, the son of businessman Alfred Holmes and schoolteacher Isabella Holmes. A precocious, goal-driven youth, early on he took his grandfather, Hamilton Mayo Holmes, a physician, as his career role model. An exceptional student at Atlanta’s elite Henry McNeal Turner High School, he graduated in 1959 as senior class president, class valedictorian, and co-captain of the school’s football team.

Holmes persuaded fellow Turner High graduate Charlayne Hunter (later Charlayne Hunter-Gault) and civil rights activist Jesse Hill that they should attend the University of Georgia (UGA) where science offerings there were superior to other Georgia schools, including Georgia State University and Morehouse College. Thus, when the fight to allow African Americans to enroll at UGA had finally been won through the judicial process, Holmes and Hunter entered the campus to enroll in classes on January 9, 1961. They were greeted with jeers, racial slurs, and threats of violence from boisterous crowds of white onlookers. White students burned crosses and hung a black effigy they called “Hamilton Holmes” at the entrance to the campus. Two days later 600 white students rioted outside Charlayne Hunter’s dormitory, forcing university officials to transport the pair back to Atlanta with an armed state patrol escort where they stayed two days before returning to campus.

Holmes’s decision to live in an apartment off campus avoided further distractions and permitted him to excel academically. He earned membership in both Phi Beta Kappa and Phi Kappa Phi honor societies and graduated from UGA in 1963, then quickly established another civil rights milestone when he became the first African American to be admitted to the Emory University School of Medicine in Atlanta. Awarded his medical degree at Emory in 1967, he began his residency at Detroit General Hospital. This was interrupted by military service in Germany as an Army ranger. Holmes returned to Emory to finish his residency and was hired there as assistant professor of orthopedics. He later became chief of orthopedics at Atlanta’s Veterans Administration hospital; started a private practice; was medical director and chairman of orthopedic surgery at Grady Memorial Hospital, the largest hospital in the Southeast; and a faculty member and associate dean at Emory’s medical school.

It took a number of years for Holmes to come to terms and forgive his early mistreatment at UGA. In 1983, after initially rejecting the request, he joined the board of trustees of the University of Georgia Foundation. In 1985, the Holmes-Hunter Lecture was launched at UGA; in 1986 Holmes and Hunter were given the school’s 200th Anniversary Medal in recognition of their pioneering effort, and in 1992 the Holmes-Hunter Scholarship for Black students attending UGA was announced. On October 26, 1995, two weeks after receiving quadruple bypass surgery, Holmes died in his home in Atlanta at the age of 54. He left behind his wife, Mary Vincent Holmes, his son and UGA graduate Hamilton E. Holmes Jr., and daughter Alison Holmes. Commemorating the 40th anniversary of desegregation of UGA, in 2001 the school’s Academic Building was rechristened the Holmes-Hunter Academic Building.