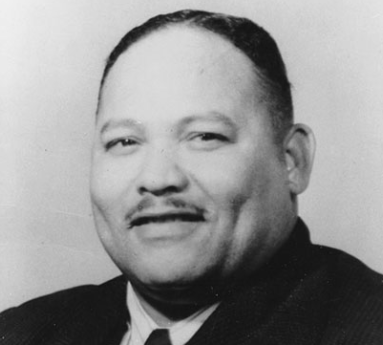 George Washington Lee was an African American civil rights leader, minister, and entrepreneur. On May 7, 1955, Lee was murdered by white supremacists in Belzoni, Mississippi. The murder remains unsolved. Lee’s murdered was one of two key events that occurred in Mississippi in 1955 along with the Emmett Till murder three months later, that inspired the national Civil Rights Movement of the late 1950s and the 1960s. Lee was born on December 25, 1903 to unnamed parents in Edwards, Mississippi. His mother was an illiterate plantation worker and he had an abusive stepfather. After Lee’s mother died when he was young, Lee moved in with his aunt. He graduated from high school in 1921 and moved to New Orleans, Louisiana.

While living in New Orleans, Lee worked on the banana docks and took a correspondence course in typesetting. As the Great Depression swept across the nation in the early 1930’s, Lee became a preacher in Belzoni, Mississippi leading a Baptist congregation. While living in Belzoni, Lee worked with local Black business and community leaders. Lee also served as pastor to three more churches and opened a grocery store. His wife Roseband, whom he married, ran a house painting business out of their home.

In the 1950’s, Lee became the first Black person to register to vote in Humphreys County in recent memory. In 1953, Lee and a friend, Gus Courts, co-founded a Belzoni chapter branch of the NAACP. As leaders of the local NAACP, Lee and Courts registered 92 African Americans in Humphreys County in 1953. Lee was also Vice President of the Regional Council of Negro Leadership (RCNL), an African American Civil Rights organization in Mississippi. The RCNL promoted self-help, business formation, civil rights, voting rights, and social justice.

In April 1955, Lee made a speech at a RCNL annual meeting that drew a crowd of more than 7,000 in the Black town of Mound Bayou, Mississippi. In that speech Lee said “Pray not for your mom and pop. They’ve gone to heaven. Pray you can make it through this hell.” On May 7, 1955, less than one month after he made the speech, Lee was shot and killed while driving his car in Belzoni, Mississippi. Unidentified shooters pulled alongside his car and fired three times from shotguns which shatter his jaw and causing his car to leave the road. Lee died shortly before arriving at a local segregated hospital. After his death, T.R.M Howard, Medgar Evers, and other Mississippi civil rights leaders demanded an investigation into Lee’s murder but County Sheriff Ike Shelton and Governor Hugh L. White refused to look into the matter. United States Attorney General Herbert Brownell Jr ordered the justice department to start an investigation. Despite federal involvement Lee’s murder case remained unsolved.

The Lee funeral was attended more than 1,000 attendees including speakers Howard and NAACP National President Roy Wilkins. His widow Rosebud Lee decided to have an open casket to show people on what happen to her husband. Months after Lee death, two high-profile racial murders would occur in Mississippi including the murders of Lamar Smith and Emmett Till by white supremacists in August 1955. Despite Lee’s murder, the voter registration campaign continued into the 1960s when it became part of the state-wide effort to register and get African Americans to the polls.