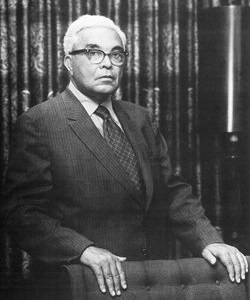 George Leon Netterville, the controversial President of Southern University, was born in the Ascencion Parish section of Donaldsonville, Louisiana on July 16, 1906. In his youth, he attended the local segregated schools, and received his BA in education from Southern University in 1932, and his MA from Columbia University in New York in 1934. Netterville initially worked with the National Benefit Insurance Company for four years before becoming an education advisor for the Civilian Conservation Corporation (CCC).

Netterville returned to Southern University in 1938 as the Dean of men and Business Manager for the university. He was also the president of Southern’s Alumni Association. In 1967, he became the president for finance and business affairs, and also served as the president of the Black Business Managers Association of Louisiana. Netterville officially became the third president of Southern University in 1968. During his tenure, he was responsible for obtaining over ten million dollars in federal funding for the school, which was used for constructing buildings and academic programming.

In 1972, the student organization Students United, led a series of protests on the Southern University campus. Southern had the largest enrollment of any historically black institution (HBCU) with over 10,000 students on the campus. Yet there was not enough housing available for all of the students. Bedding was torn and worn out, and there was not enough funding for activities. The students also wanted more input in what was being taught in classes and how it was being taught.

After the arrest of four students by Baton Rouge police, the organization’s leaders went to meet with President Netterville to ask him to go to the police station to see about the release of the students. When a security guard saw a large group of students entering the administration building, a call was made to the local police, reporting that President Netterville was being held hostage in his office. The call turned out to be erroneous since Netterville told the students that he would go to Baton Rouge police headquarter to secure the release of the arrested students and asked Students United leaders to wait for him in his office. There is no evidence, however, that he left campus. Meanwhile more than 300 local police along with Louisiana National Guard members arrived on campus armed with a tank and riot gear and ordered the students to vacate the administration building.

The officers threw tear gas canisters at other students who had gathered outside, and when one student threw a canister back at the officers, gunshots rang out. No students were armed at the time. After the smoke cleared, two students were dead, Denver Smith and Leonard Brown. Netterville fired professor of engineering George W. Baker Jr., and chairman of the civics department Joseph Johnson for advising students to protest by boycotting classes. Pressured by local officials, however, Netterville retired from his position as university president after the incident.