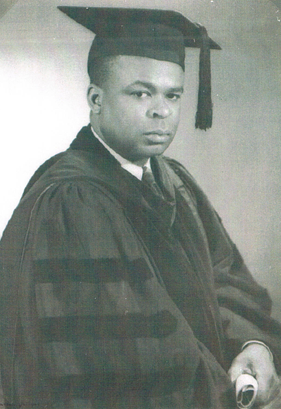 Political Scientist George James Fleming was born in Bassein Triangle, Christiansted, St. Croix, Danish West Indies (now U.S. Virgin Islands) on February 15, 1904 to parents Alexander Fleming and Ernestine Jackson Fleming. His primary education began at the Moravian Day School at the Centre Mission as St. Croix’s public schools did not go beyond the ninth grade. At 16, in 1920, he left home for Virginia to study at the Hampton Institute Academy at Hampton Institute (now University). He graduated as valedictorian in 1926. Fleming received a Bachelor of Arts degree in journalism at the University of Wisconsin at Madison in 1931 and earned the Phi Beta Kappa key. In 1935, he was initiated into the Xi Chapter of Kappa Alpha Psi Fraternity, Inc. at Howard University in Washington, D.C. Three years later, in 1938, he became the second editor of the Kappa Alpha Psi Journal.

In 1942, Fleming relocated to Philadelphia, Pennsylvania, enrolled in its Ivy League institution, the University of Pennsylvania, and earned a Master of Arts degree in Applied Economics in 1944. Afterward, he worked simultaneously with the American Friends Service Committee, a Quaker organization while studying toward the Doctor of Philosophy degree completed in 1948. His dissertation was on The Administration of Fair Employment Practice Programs. After completing his Ph.D., Fleming relinquished his duties as editor of the Kappa Alpha Psi Journal.

Fleming was supervising editor of the Who’s Who in Colored America, Seventh Edition in 1950. Two years later, in 1952, he was the editor of the New York Amsterdam News and a contributor to the Journal & Guide Newspaper in Norfolk, Virginia. In 1954, Fleming was offered a professorship at Morgan State College in Baltimore, Maryland. He also created and implemented the Morgan’s Institute for Political Education with a grant from the Ford Foundation for $103,000. In 1956, Fleming married Hazel Hampton, a social worker for the Baltimore School System from Philadelphia, Pennsylvania. He also authored An All-Negro Ticket in Baltimore, Eagleton Institute Cases in Practical Politics, published in 1960. One year later, in 1961, he was a joint planner in the founding of the College of the Virgin Islands (now the University of the Virgin Islands) and became a member of its Board of Trustees in 1966 and a member of the Morgan State’s Board of Regents.

Why Baltimore Failed to Elect a Black Mayor was one of Fleming’s more recognized works published in 1972 by the Joint Center for Political Studies in Washington, D.C. In 1974, upon Fleming’s retirement, he was honored as a Professor Emeritus of Political Science. He served as the Morgan State Board of Regents’ chairperson from 1976 to his retirement in 1981 and Director of the Institute for Political Education until 1996.

Dr. George James Fleming died of liver and heart ailments on August 1, 1990, at home in Cockeysville, Maryland. He was 86.