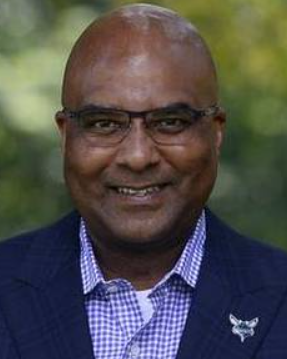 Fred Whitfield is the President, Chief Operating Officer, and minority co-owner of the Charlotte Hornets, a franchise in the National Basketball Association. Whitfield shares ownership with his longtime friend and basketball great Michael Jordan. Together they are the only African American owners in the league.

A native of Greensboro, North Carolina, Whitfield credits his parents, Fred Sr. and Janol, with instilling in him a dedication to education and social justice. He attended Campbell University, a private Baptist college in Buies Creek, North Carolina, where he was an all-conference basketball player. Whitfield earned a degree in economics, a Master’s in Business Administration, and served as assistant basketball coach at the school. In 1998 he earned his juris doctorate from North Carolina Central University, where he served as president of the Student Bar Association.

Whitfield’s professional career has flourished in the fields of sports and the law. He first established a law practice in Greensboro, where he represented professional athletes in the region. Whitfield then joined Nike Basketball as director of Player Development, a role in which he negotiated endorsement contracts and oversaw marketing for NBA players. In 2000 he joined the Wizards, the NBA franchise in Washington DC, as Assistant Legal Counsel. The move reunited him with longtime friend Michael Jordan, then finishing his Hall-of-Fame career with the Wizards. The two first met in 1980, when the high school-age Jordan attended a summer basketball camp at Campbell University run by Whitfield. In 2003, after three years with the Wizards, Whitfield joined Jordan Brand, his friend’s sports management company.

In addition to his professional accomplishments, Whitfield leads an active civic life in Charlotte. He founded HoopTee Charities, Inc., a nonprofit organization devoted to providing scholarships to disadvantaged youth to attend educational programs around the country. Whitfield also founded Achievements Unlimited Basketball School, a youth program of basketball, education, and drug-free messaging. Since its founding in 1984, the program has coached more than 10,000 children.

In 2020, as protests again racial violence and police brutality occurred around the country, Jordan and Whitfield announced a 10-year, $100 million program of social justice and education to be administered by Jordan Brand.

Whitfield has received numerous honors and awards, including the American Bar Association’s Thurgood Marshall Award of Excellence, YMCA George Williams Award, and Citizen of the Carolinas. In 2018 he was inducted into the North Carolina Sports Hall of Fame. He currently serves on boards of the Charlotte Chamber of Commerce, Charlotte Sports Foundation, Charlotte Executive Leadership Council, and his alma mater, Campbell University.