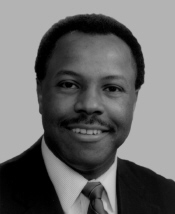 When Gary Franks was elected to Congress in 1990, he was the first black representative from Connecticut and the first black Republican in Congress in nearly 50 years. Son of a brass factory worker and a dietary specialist, education was a high priority in Franks’s Waterbury family. In fact, Gary was the only one of the five Franks children who did not obtain a professional degree.

After he attended a private Catholic school in Connecticut, Franks received an academic scholarship to Yale, graduating in 1975 with a major in sociology. His first post-graduate experience came from working as an industrial and labor relations executive in Connecticut. When his father began to suffer from diabetes, Franks took over the management of his father’s property holdings and he eventually opened his own real estate business.

As a leading businessman in Waterbury, Franks took a keen interest in local affairs. He entered local politics as an alderman and served until 1990. After an unsuccessful race for the Connecticut State Legislature, he ran on the Republican ticket for the U.S. House of Representatives and won in 1990. This victory made him the nation’s top-ranking elected black Republican.

Franks served on the House Committees on the Armed Services and Small Business, and the House Select Committee on Aging. He gained notoriety as a freshman congressman in the eyes of fellow Republicans like Newt Gingrich and Dan Quayle when he became the only Republican member of the Congressional Black Caucus (CBC). Franks also criticized the CBC for its allegiance to the Democratic Party.

After serving three terms in Congress, he lost his bid for reelection in 1996. Two years later he ran unsuccessfully for the U.S. Senate against incumbent Christopher Dodd. Franks has since retired from public life.