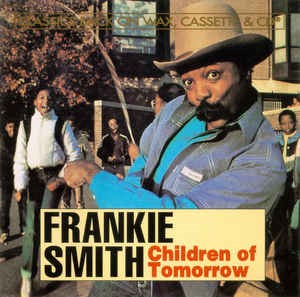 The R&B novelty records artist Frankie Smith was born Franklyn Leon Smith in Philadelphia, Pennsylvania, on January 29, 1953, to Mary Josephine Smith, who worked at the commissary of the Philadelphia Naval Hospital. He began playing the piano in 1961 at the age of 8 in 1961.

In 1972, Smith worked as a writer with Gamble and Huff at Philadelphia International Records and moved up to a producer. He collaborated with numerous musicians, including Archie Bell and the Drells and Harold Melvin and the Blue Notes. However, he was furloughed because of the downsizing of the recording industry. This disappointing experience led him in 1974 to enroll in Tennessee State University in Nashville as an elementary education major. One year later, in 1975, Smith became the father of a daughter, Vashon “Indy” Smith.

In 1981, Smith released his first album, Children of Tomorrow which included the single “Double Dutch Bus” on the Philadelphia record label WMOT (We Men of Talent) Records. The song was partly inspired by his hometown transit system, Southeastern Pennsylvania Transportation Authority (SEPTA), and the children’s rope game of Double Dutch. The song became an instant smash hit because of its dialectical language usage (Pig Latin) frequently used in local nightclubs and neighborhood streets.

“Double Dutch Bus” peaked at no. 1 on the US Billboard R&B chart and remained on the chart for eight weeks. It reached no. 30 on Billboard Hot 100 and made the Billboard Pop Top 40. The song sold more than one million copies and Smith appeared on Dick Clark’s American Bandstand.

Later in 1981, Smith released two more singles, “The Auction” and “Children of Tomorrow” on the WMOT label and “Teeny-Bopper Lady” on the Metronome Records label. The following year, 1982, Smith, a master manipulated of the yo-yo, combined it with disco music when he recorded the single “Yo-Yo Champ (From Mississippi)” on Frills Records label. Side A was vocal, and B was instrumental. The single did not make the charts.

Smith next attracted step teams in 1985 with the release of the CD “Slap Ya Thigh” on the CD Baby label. In 1993, Smith recorded a new version of his now 12-year-old hit record with the single “The New Double Dutch Bus.” It did not make the music charts. However, knowing how to “walk the dog” and perform other frivolous yo-yo acts, Smith was invited to perform on the television show, Dangerous Minds that aired on ABC network in 1995.

In 2006, Smith’s CD, the second and final album, Frankie Smith and His World Wide Party Crew, was released. As with his other post-1981 singles and his first album, it did not chart.

Franklyn Leon Smith died in Philadelphia, Pennsylvania, on March 8, 2019. He was 63.