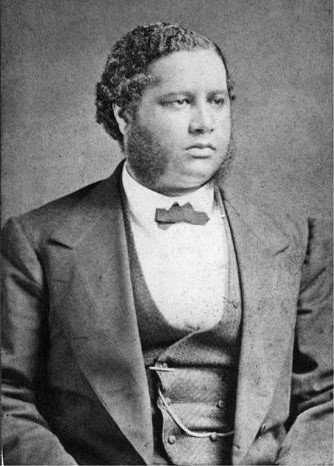 Francis Lewis Cardozo was a minister, educator, and politician, who was born free in Charleston, South Carolina, on February 1, 1836. Cardozo was of mixed ancestry, as his father, Isaac Nunez Cardozo, was a Sephardic Jew, and his mother, Lydia Williams Weston, was a free woman of color. South Carolina laws did not allow for interracial marriages, so the couple’s union was considered a common-law marriage. The couple had five children, three boys and two girls. Cardozo and his brothers were sent to a private school for children of color.

At the end of his schooling, Cardozo worked as a carpenter and ship builder. In 1858, he used his own savings to pay his way on a ship headed to Scotland and enrolled at the University of Glasgow, where he began to study Greek and Latin. He studied at Edinburgh Theological and London seminaries and was an ordained Presbyterian minister when he returned to the United States in 1864. Cardozo became the pastor of the Temple Street Congregational Church in New Haven, Connecticut, and married Catherine Rowena Howell on December 20, 1864. The couple had six children.

Cardozo returned to Charleston in 1865 as an agent for the American Missionary Association (AMA), founded in 1846 by an abolitionist group from Albany, New York. He worked as the superintendent of an AMA-established school and was responsible for its transformation into The Avery Normal Institute. The institute focused on training black teachers. Cardozo, a member of the Republican Party, became involved in Reconstruction politics and by 1868, he was selected as a delegate to the South Carolina State Constitutional Convention where he chaired the education committee. He called for the dissolution of the plantation system and for racially integrated schools. Cardozo’s speech led to his election as the first black secretary of state in South Carolina’s history.

In 1872, Cardozo was elected state treasurer of South Carolina, and was re-elected in 1874 and 1876 before he resigned in 1877. He refused to cooperate with corrupt officials, and was unsuccessfully impeached in 1874. In 1877, he was indicted for corruption by the newly-elected Democratic leadership. Cardozo relocated to Washington, D.C., and began working in the U.S. Treasury Department in 1878. He became the ­principal of the Colored Preparatory High School in 1884, was responsible for introducing a business curriculum, and led the school to become one of the leading high schools for Black children in the nation. He remained at the school until 1896, and died in Washington, D.C., on July 22, 1903, at the age of 67. In 1921, Cardozo’s great-granddaughter Eslanda Cardozo Goode married singer Paul Robeson, and in 1928, the Department of Business Practice in Washington, D.C., was reorganized into the Cardozo Senior High School, in his honor.