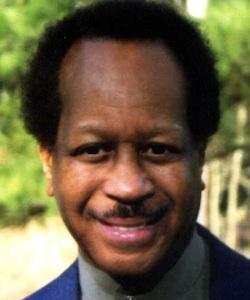 Mathematician Floyd Leroy Williams was born on September 20, 1939 in Kansas City, Missouri. He attended his local schools, and in his senior year of high school, he was offered a scholarship to Lincoln University of Missouri to study music. Williams studied Classical Piano and became interested in Einstein’s Theory of Relativity in his sophomore year. He graduated in 1962 with his Bachelor’s degree in Mathematics, and went on to Washington University in St. Louis, Missouri, earning his Masters in 1965 and his doctorate in 1972. His doctoral thesis was in the field of Lie Theory, a branch of mathematics that focuses on symmetry.

Dr. Williams began a dual career as a jazz pianist, as well as Instructor and Lecturer. From 1972 to 1975, Dr. Williams taught at the Massachusetts Institute of Technology (MIT), an additionally as an Associate Instructor at the University of California-Irvine. Dr. Williams joined the faculty at the University of Massachusetts-Amherst in 1975 as an Assistant Professor, was promoted to Associate Professor in 1978, and has been working as a full Professor since 1984. He was awarded a National Science Foundation Major Research instrumentation grant in 1983 to further fund his research into mathematical physics.

Dr. Williams is internationally known as well for his composing and musical skills as a jazz piano player. He gave performances in Japan, India, Russia, Argentina and France. Williams also became an ordained Christian Minister in 1990 and has served in that capacity for over 28 years. Dr. Williams served as a visiting Professor at a number of universities around the world including Sophia University in Tokyo, Japan; the State University of New York, Stonybrook; the State Technical University in St. Petersburg, Russia; and the Institute of Theoretical Physics in Sao Paolo, Brazil.

Dr. Williams is responsible for the summer camp at MIT that allows pre-college students and undergraduates to meet and talk with scientists, mathematicians and engineers. He published four books and over forty research papers, and his numerous writings have been featured in journals such as Topics in Quantum Mechanics and Mathematical Methods in Physics. He has given more than sixty-five lectures in universities and institutes in fourteen countries. Upon his retirement in 2005, Dr. Williams became Professor Emeritus at the University of Massachusetts-Amherst. In 2011 Dr. Williams was inducted into the Lincoln University, Missouri Hall of Fame and in 2012 he became a fellow of the American Mathematical Society.