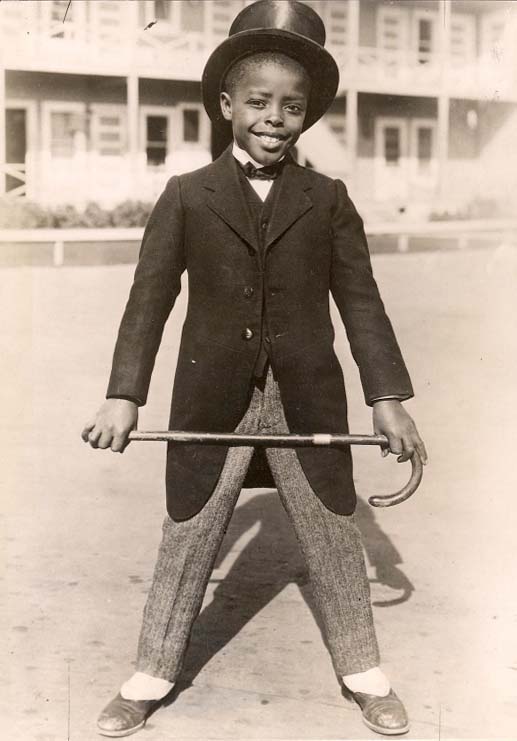 Ernest Frederick Morrison was the first black child movie star signed to a long-term contract and is most famous for his role in the Our Gang/ Little Rascals series. Morrison was born on December 20, 1912 to Louise (Lewis) and Joseph Ernest Morrison, in New Orleans, Louisiana. He made his unofficial movie debut as an infant, filling in for another child that would not stop crying. He was given the nickname “Sunshine” by the crew, and later went on to use the names Sunshine Sambo, Little Sambo, Sunshine Sammy, Ernie, or just Sammy. Morrison made his official movie debut in 1916, in The Soul of a Child, at age three. From 1917 to 1922, Morrison appeared in a series of silent films produced by Harold Lloyd, alongside then-child actor Marie Osborne, produced in New York.

In 1919, Morrison became the first African American actor to be signed to a long-term contract with comedy film producer Hal Roach. Roach created a series called The Sunshine Sammy Series just for Morrison in 1921, but only one segment produced was aired. Roach recreated his idea in a series called Hal Roach’s Rascals/ Our Gang. Morrison made his debut as “Booker T. Bacon” in the 1922 debut short of the series called “One Terrible Day.” As the oldest member of the cast, Morrison was paid $10,000 a year, making him the highest paid black actor in Hollywood at the time. He filmed twenty-eight episodes and remained with the show until 1924, when he was twelve years old.

In 1934, Morrison at the age of 22, married Annette McAbee, but the couple divorced in 1936. For the next few years, Morrison performed in vaudeville shows and toured abroad before returning to the screen in 1940. He was cast in the series producers in Los Angeles called The Dead End/ East Side Kids, and played a character named “Scruno” for the next three years. He performed with The Four Step-Brothers, a dance group, for a short time in 1943.

Morrison was drafted into the US Army during World War II in 1944, and he often performed as a comedian-singer-dancer for the troops. After his discharge in 1945, Morrison was offered a part in the series, The Bowery Boys, but he declined the offer. He accepted a job as a quality control inspector for an aerospace company in Compton, California, and worked there for the next seventeen years. After he retired, he again appeared on television in the 1970s in episodes of Good Times and the Jeffersons. Morrison appeared in one hundred and forty-five motion pictures in his career. He was inducted into the Black Filmmakers Hall of Fame in 1987 but only two years later died of cancer at the age of 76 on July 24, 1989, in Lynwood, California.