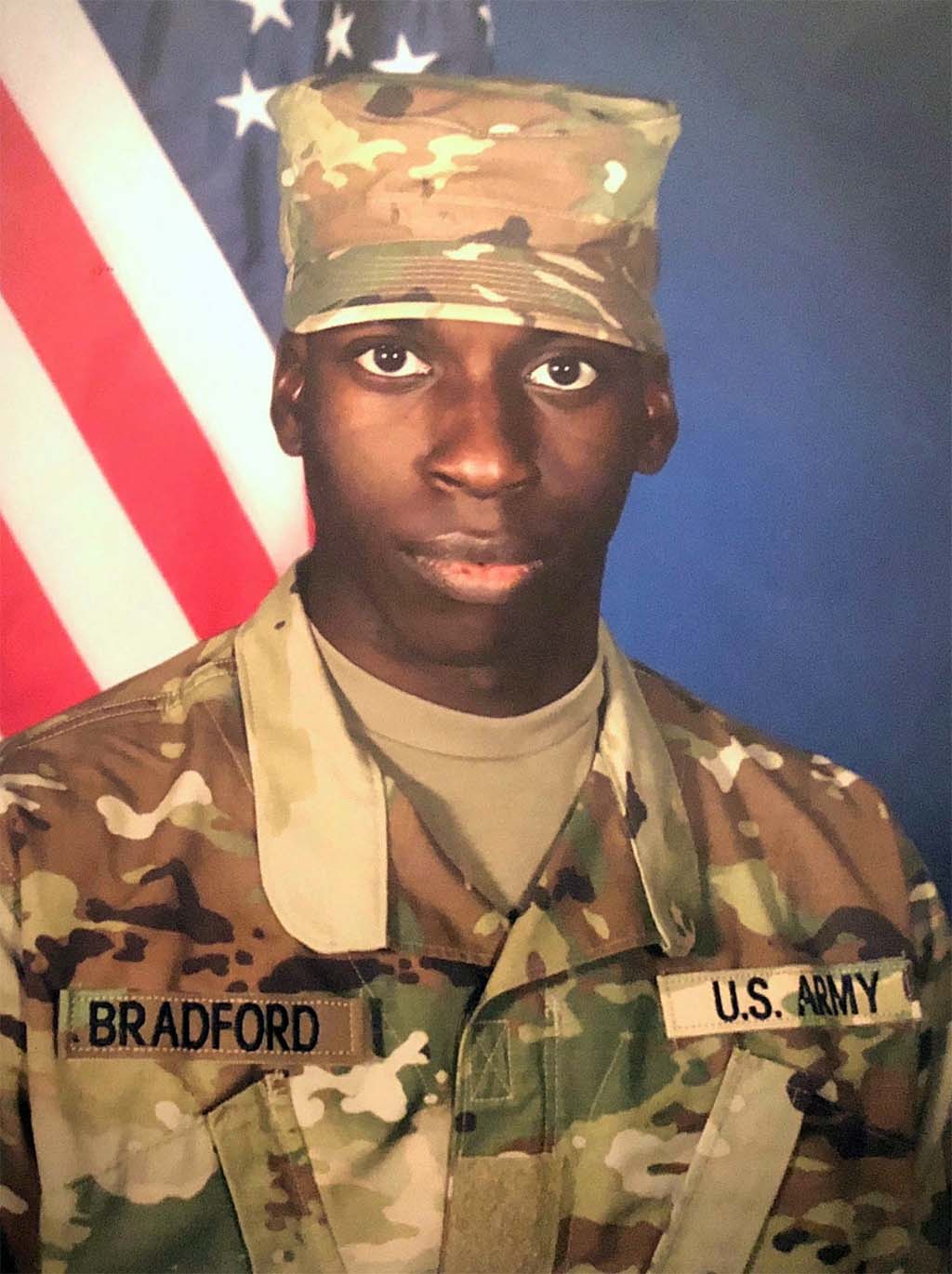 In 2018 Emantic Fitzgerald Bradford Jr., a 21-year old Army veteran, was shot and killed by a police officer who mistook him for another alleged assailant at a shopping mall in Hoover, Alabama. The shooting was protested by civil rights organizations and cited as an example of racially biased policing. Bradford, known as “E.J.” to his friends and family, was born on June 18, 1997, to Emantic Bradford Sr. and April Pipkins. He attended high school in Birmingham and, in 2017, enlisted in the U.S. Army, from which he had an administrative separation the following year. His father was a former corrections officer.

On Thanksgiving night, November 22, 2018, an altercation between several men resulted in shots being fired at the Riverchase Galleria in Hoover, a suburb of Birmingham. An 18-year-old man named Brian Wilson was shot twice, and a 12-year-old girl, an innocent bystander, was also struck by a bullet. Both survived. Erron Brown, the alleged shooter, ran from the scene and entered a department store. Bradford, who was unacquainted with the individuals involved, was standing several feet away at the moment the shots were fired. Surveillance footage from two adjacent stores shows Bradford initially ran a few steps away from the scene, then turned around, drew a firearm that he was legally authorized to carry, and began moving back towards the injured man who was lying on the floor. Witnesses later reported it appeared Bradford was helping escort others to safety.

Two Hoover Police Department officers were in the mall about 75 feet away from where the initial altercation took place. Upon arriving on the scene approximately five seconds after the first gunshots, they encountered Bradford, who had his firearm out and was facing away from the officers. Believing Bradford to be the assailant, one of the officers fired his weapon four times, striking Bradford in the head, neck, and back. The officer later reported he did not issue any verbal warnings to Bradford due to the immediate threat to public safety the officer believed he posed.

The killing of Emantic Bradford Jr. resulted in widespread protests, with many noting the grim irony that the Army veteran and registered gun owner epitomized the “good guy with a gun” trope that was then part of the pro-gun rhetoric of the National Rifle Association (NRA). In the days after the incident, the National Association for the Advancement of Colored People (NAACP), Black Lives Matter, and a local group called the Justice League called for officials to release the officers’ bodycam footage as well as all available surveillance video. Protesters marched from City Hall to the Riverchase mall, shutting down a local highway in the process.

In a report issued ten weeks after the shooting, the Alabama Attorney General concluded the officer’s actions were reasonable under the circumstances and the case would not be presented to a grand jury. On November 22, 2019, exactly one year after the shooting, April Pipkins, Bradford’s mother, filed a lawsuit against the City of Hoover and the still unnamed officer.

Office of the Attorney General, State of Alabama, “Report Involving the Officer-Involved Shooting Death of Emantic (“E.J.”) Bradford Jr. at the Riverchase Galleria On November 22, 2018,” February 5, 2019, https://www.alabamaag.gov/Documents/news/Hoover/Report.pdf; Eliott C. McLaughlin, “Family sues Hoover, Alabama, and the officer who killed Emantic Bradford Jr. at a mall on Thanksgiving,” CNN, November 25, 2019, https://www.cnn.com/2019/11/25/us/alabama-mall-shooting-lawsuit-hoover-emantic-bradford/index.html; Khushbu Shah, “‘If he had been white they wouldn’t have shot him,” The Guardian, December 9, 2018, https://www.theguardian.com/us-news/2018/dec/09/ej-emantic-fitzgerald-bradford-jr-shooting-alabama-mall-family.